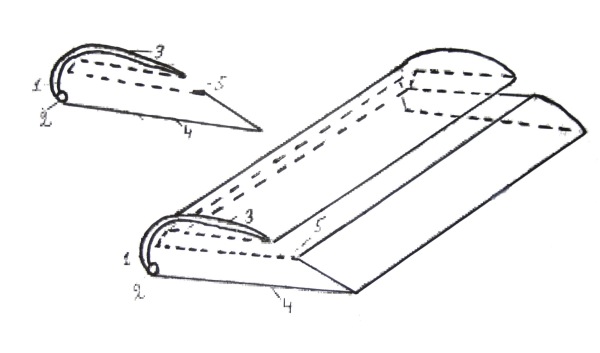 But all experts have told us, that it is idiocy: low pressure inside a wing makes nothing - elevating force is a result of a difference of pressure around a wing. But some months ago Russian engineers carried out tests of a wing with such cracks. And they have received unexpected results. Elevating force has increased in 2 times and speed 30%.

We would like to declare our priority. Though the Russians have made on a wing the 7 cracks, the quantity of cracks does not change the essence of the invention. Cracks can be also 2 or 3. In a usual wing elevating force is created only with 2/3 surfaces as the other 1/3 divides a stream of air.

As against prototypes all area of the submitted wing creates elevating force.

This effect is reached by that on the top surface of a wing in a zone of the lowest pressure there is a cut. This cut opens a cavity inside a wing. The wing should be hollow (i.e. to have free space between longerons and other devices) and closed from lateral faces too. During flight inside a wing the same low pressure is created which is at a back edge of a wing. Thus there is a difference of pressure around the bottom covering of a wing. The area of this covering is more on 30% than the area of that top surface, above which the difference of pressure is created. Thus elevating force of this wing is more a minimum on 3 % than usual.

During supersonic flight inside a wing the vacuum is created as air has not had time to come inside a wing. Elevating force means will be more.

It is possible to make such cuts on propellers.