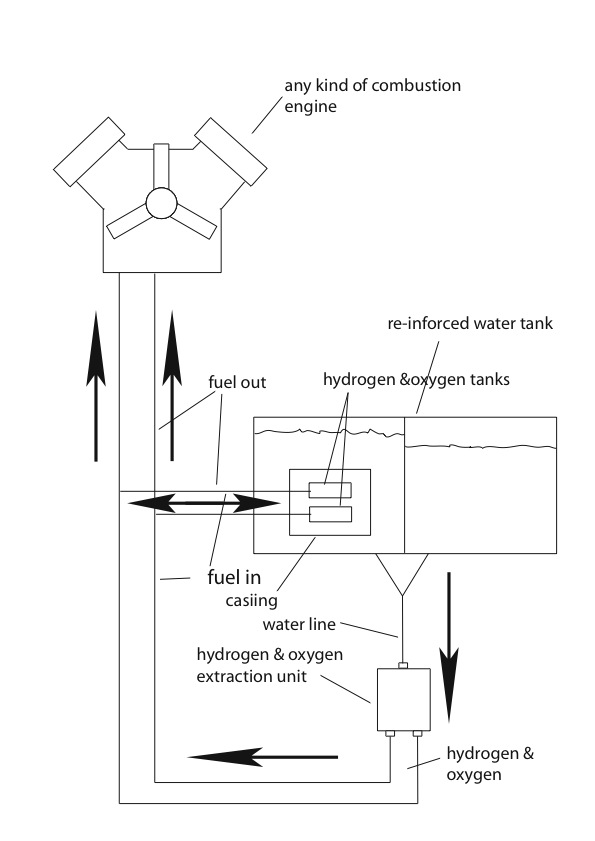 My idea solves the problem of pollution, engine longevity, and vehicle range (unlimited). This idea also has the added benefit of more engine power. There is currently nothing quite like it on the market.

I would suggest that this technology be applied to Trucks, Taxis, Aircraft, Ships and other hard wearing vehicles, where changing a vehicle often is usually frowned upon. They need to able to recuperate the initial cost of the system, and so would take a year or so to get their money back.

Given time, people may want the system for their cars, but I believe people would be interested in cars with this system that had been as well built and long lasting as this technology is.

Combined with lifting tech from something like Electra, you have a spaceship. I reckon you can go into hyperspace with this technology. If the people at C.E.R.N or that other place can figure out how to make negative matter, you’ll have a full-blown spacecraft with shields.
You could try galactic travel without shields, if you want to risk it.

My design works by having Hydrogen and Oxygen storage tanks encased in an explosive resistant/proof casing. This is surrounded by water to slow down and lessen the explosive shock, and then surrounded by a reinforced water tank. This tank will take the place of the vehicles fuel tank. The electrolysis equipment could be placed in the tank too. I might have problems with hydrogen extraction, so maybe Mr SA might be able to help.

I have made the storage of Hydrogen and Oxygen practical. No chance of danger due to external/internal explosions (yes, I know this should be in the safety part of the competition) and collisions.

Mechanical and electronic engineers and gas fitters/welders can manufacture this system.

This fuel could have been done in the 50’s, if anyone wanted it. Although it couldn’t of been done as well and as neatly as is now potentially available. Still…

One things for sure, together with my ideas, I believe, this is the ultimate fuel system.

One thing: If going close to the speed of light, makes you get everywhere all at once, does anyone know how to steer in hyperspace?

One more thing: There is supposed to be a big rock headed our way, with our name on it in 2018. How about we build rockets with this technology and then stick them on the asteroid and position it in an Earth orbit, and start mining it? Nuclear bombs could be used to steer the rock away, but it may break up the precious material. Rendering it even more dangerous to mine.

I’ve heard said that in one large asteroid, there could be more gold and other precious metals than have ever been mined on Earth!