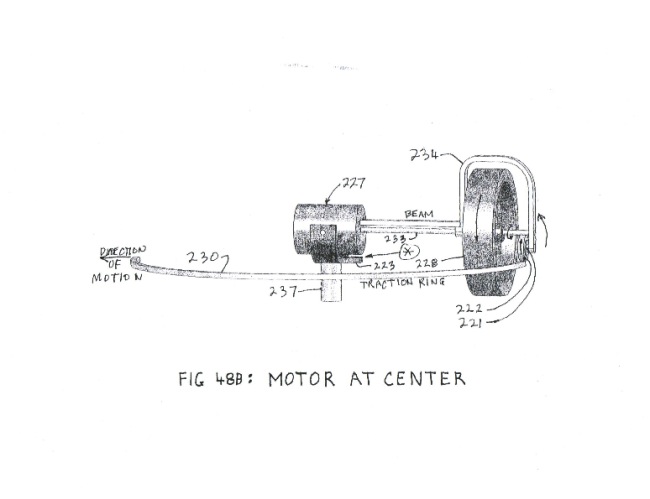 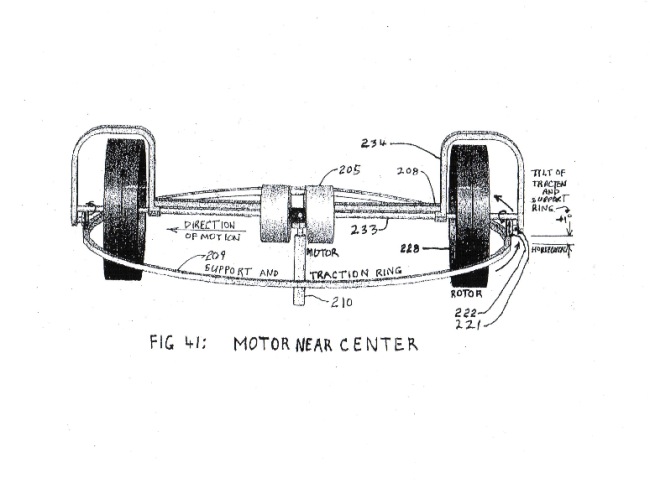 Inertial Propulsion requires no propellant or jets to produce motion. Motion is produced by what Dr. Eric Laithwaite termed Motion-by-Mass-Transfer (MMT) (Horizontal Motion=HMT, Vertical=VMT). Its principle of operation relies on spinning horizontally precessing flywheels having reduced inertia in the direction of precession. A rotor with all its mass in a thin rim theoretically can lose all its inertia, while a solid disk rotor can lose only up to 50%. In 1995 Laithwaite patented an inertial propulsion device-too complex to produce.

If a rotor with an axle and pivot point precesses 360º , no net movement is gained. But if it precesses 180º with reduced inertia and is traction-driven the other 180º with full inertia, a net movement in the direction of precession occurs. It is analogous to half-wave rectification to obtain DC from AC. Each rotor moves with Uniform-Circular-Motion (UCM)-no jerking.

Figure-48B, US patent 7,900,874 shows a configuration using only one moving part. Figure-41, US patent application 12,931,856 shows an advanced version with two rotors 180º apart, analogous to full-wave rectification. Two more rotors could be added, each 90º apart. These horizontal motion devices require earth’s gravity to produce precession in the horizontal plane, thus converting a vertical force to horizontal motion. Combined angular momentum of the HMT-IPD/Earth is conserved via earth’s gravity. The Figure-48B device has been successfully prototyped and tested. Each full cycle produces net forward motion. Four rotors result in uniform velocity.

Figure-24, US Patent 7,900,874 is configured differently. Gravity is not required; horizontal forcing torques produce vertical precession and motion. VMT-IPDs need to be tested in the Space Station where gravitational forces are cancelled out, thus presenting a unique need for testing space related propulsion devices. VMT-IPDs are designed for orbital movement, station-keeping, deorbiting spent satellites, and attitude control of any space vehicle or probe without the need for propellant or control jets. Power can be solar cell, RTG, or nuclear. Eliminating jets and on-board propellant reduces launch weight and cost significantly. With thousands of satellites and space missions, designing, testing, and manufacturing of these devices will create new industries and jobs helping the economy and allowing United States to remain a leader in the space arena.

A ground vehicle that loses traction on ice could engage an HMT-IPD to move forward. In space, VMT-IPDs eliminate the need for jets and propellant saving about $175M/yr in launch and hardware costs. New laws require satellites to have provisions for controlled deorbiting of spent satellites. Companies like Boeing and Northrup would manufacture IPDs. Toy manufacturers could make toy radio-controlled IPDs same as helicopters. The US must take the lead in this whole new industry, and justify continued use of the Space Station indefinitely.

No comparable devices exist; they are novel and unique. After development costs, production is simple. Market potential is great considering world-wide space programs. This invention solves the problem of providing motion without propellant, reducing consumption of natural resources. Benefits include avoiding use of brute force techniques.