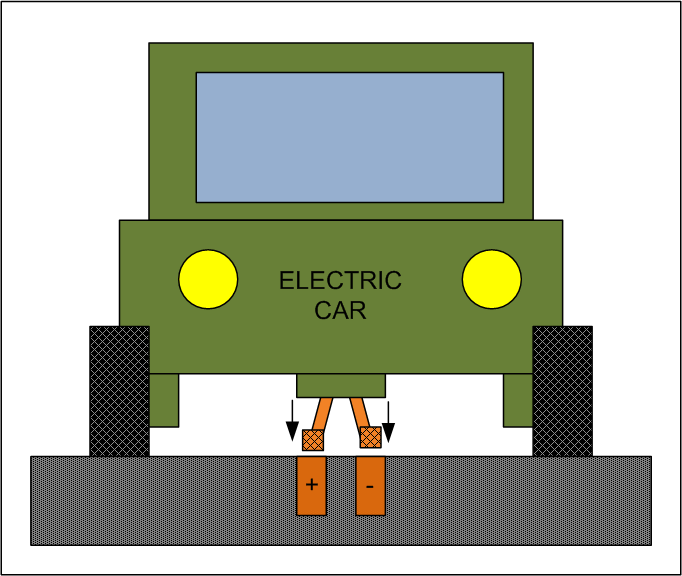 Major drawback of the electric vehicles are the batteries which only offer limited range, add weight, consume space and are a major cost component of the vehicle.

This entry proposes that this problem is alleviated by having a system which can input auxiliary electrical energy into the vehicle while it is on the road. The input system can be wires suspended above the road (similar to trolleybuses), a induction based system in the bottom, positive wire above the road and negative embedded into the road (as in bumper cars) or a galvanic contact system at the bottom as shown in the picture. The vehicles would be fitted with a device that is able to connect to the auxiliary power source and would be able to retract the connecting device when auxiliary power is not available.

The idea is to equip major roads with the power distribution system so that the vehicle can move the bulk of the distance with the auxiliary power and then travel the remaining part with its own batteries. Majority of the commuting traffic which always takes the same routes would benefit as only the end pieces of the journey would require battery power, therefore allowing the battery to be scaled down. This system would also allow for electric vehicles to travel to far away cities if the road between them was equipped with the power input system.

The problems that need to be solved before this system can be implemented are safety related and billing of electricity. Billing can be organized for example with wireless device which asks a section of the system to be powered and records the amount of electricity used. Safety of suspended wires or inductive charging systems should be good. For galvanic contact systems on the road, they should be limited to roads with no pedestrians or powered only in small sections that are always under the car.