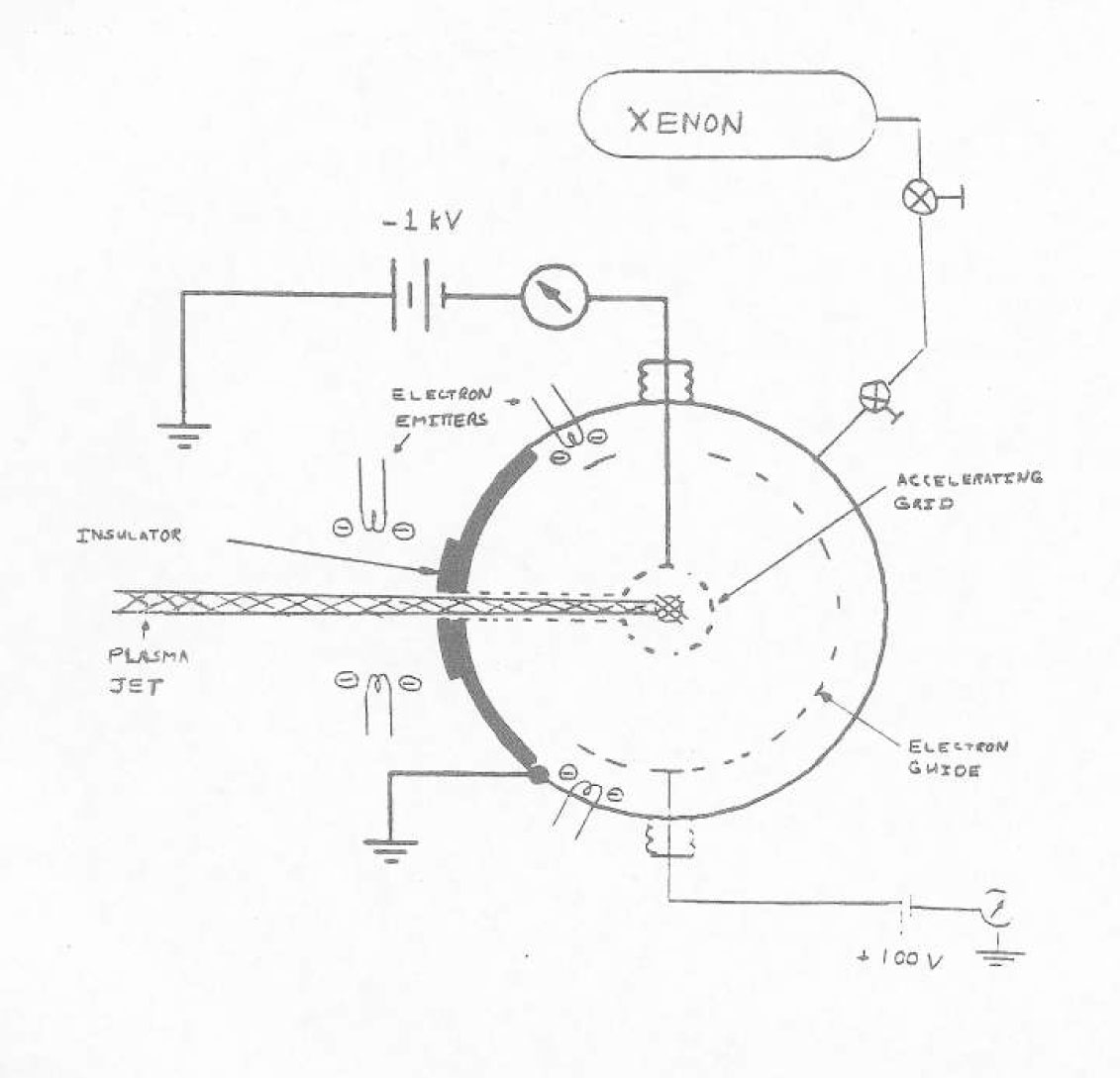 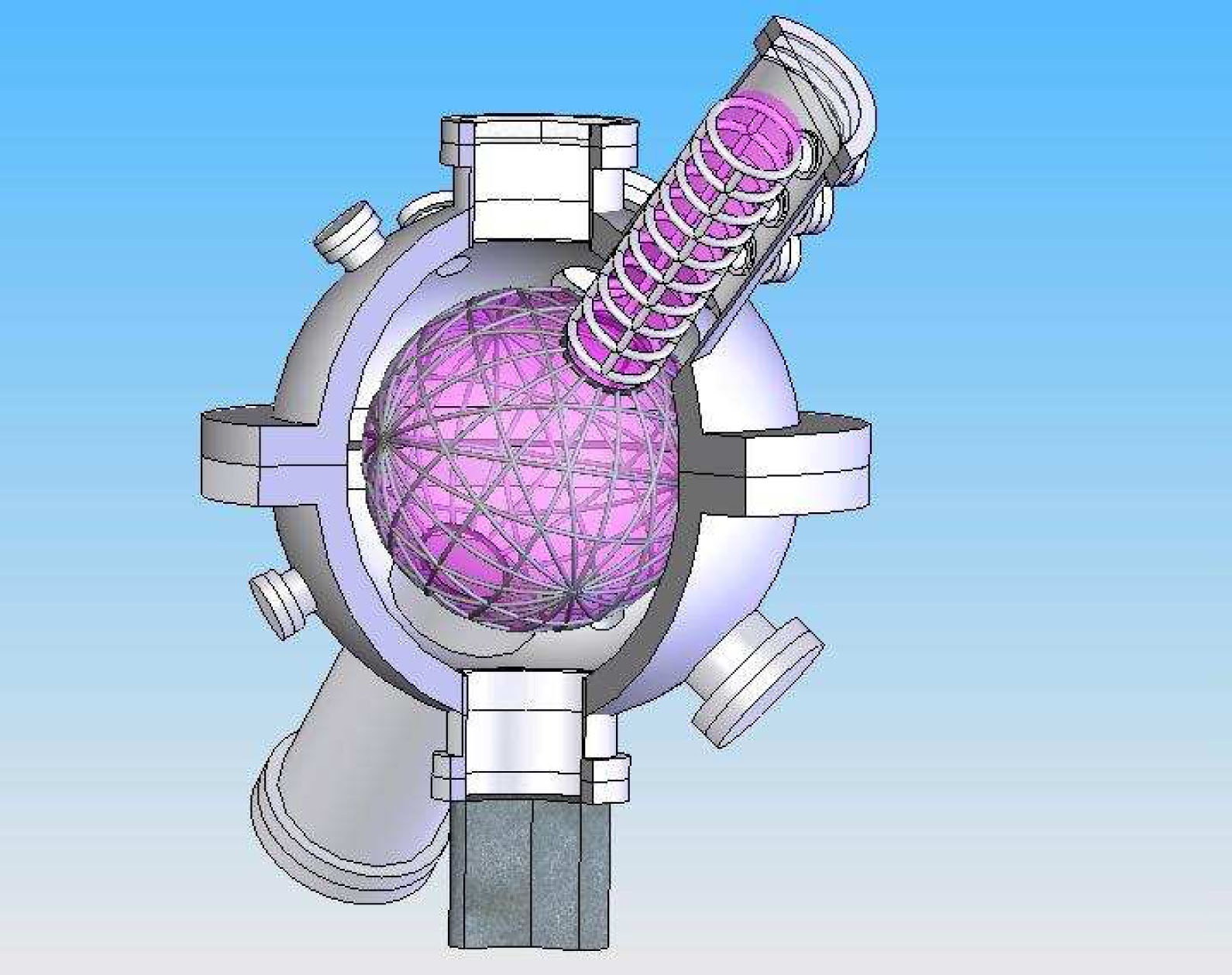 An electric-plasma thruster utilizing Inertial Electrostatic Confinement (IEC) technology has a potential application as a low-cost, high-efficiency thruster for Earth orbit maneuvering and interplanetary propulsive operations. The basic concept uses ion acceleration along with jet formation of the resulting plasma. It was originally demonstrated at the University of Illinois (U of I) as part of a fusion neutron source initiative at the school. An electrically driven counterpart of the fusion IEC has been conceived of by staff at NPL Associates, working in collaboration with U of I staff.

The IEC thruster uses a spherical configuration (similar to the classic "fusor" device), wherein ions are generated and accelerated towards the center of a spherical vacuum chamber through a spherical electrically-charged outer grid (serving as a virtual anode) and inner grid. This creates a virtual cathode central core region with high-density plasma in the center. If the grid potential field is distorted, it will pull accelerated ions into an intense quasi-neutral ion jet. One can think of an IEC thruster as similar to a traditional planar electrostatic ion thruster modified into spherical form.

Analysis shows that the efficiency of an IEC thruster would be as good as a normal plasma thruster but with longer life, simpler design, better volume usage (i.e. more compact) and enhanced heat rejection capabilities.

In this concept, the plasma target at the center of the chamber created by the intersection of the multiple ion beams through the outer grid serves to deflect ions into the escaping jet plasma.

To obtain thrust, a valley or trough must be created in the electrostatic potential, and a hole must be physically cut into the ground sphere so that high-velocity ions may form the focused jet and escape through a nozzle-type structure. Ions are generated near the ground potential with the aid of electron emitters and additional grids. A central spherical electrical grid accelerates ions to the core region. A cylindrical grid with the same electrostatic potential as the central spherical grid creates a passage through which ions can escape to the outside and create a propulsive force.

The total size of an IEC thruster may be as small as 20 centimeters and roughly spherical. Power for the fusion device would come partially from its own reaction as well as solar arrays and/or batteries. In this regard, the IEC fusor device may find useful application even though it is not able to produce more electrical power than it consumes. In the IEC thruster application, the objective is thrust rather than electrical power. IEC-derived devices are highly competitive with other propulsion systems, especially when considering that neither chemical nor traditional ion systems produce more "power" than they consume.

You can find out more about the Aerospace Research & Engineering Systems Institute, Inc. by visiting our website at http://www.aresinstitute.org

(NOTE: The accompanying schematic drawings were originally created through the work of Dr. George Miley and staff at the University Of Illinois. Dr. Miley hold patents to various IEC technologies, including plasma thrusters)