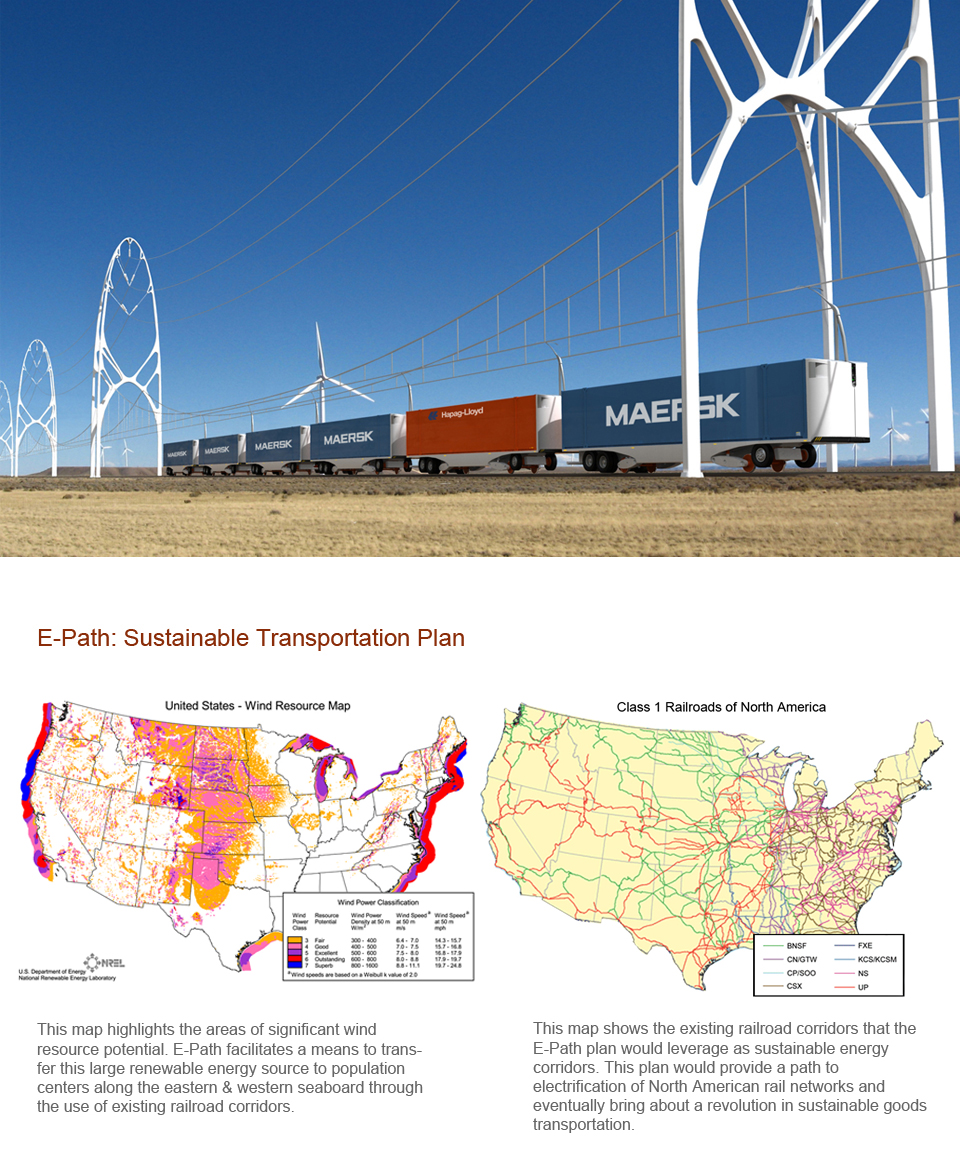 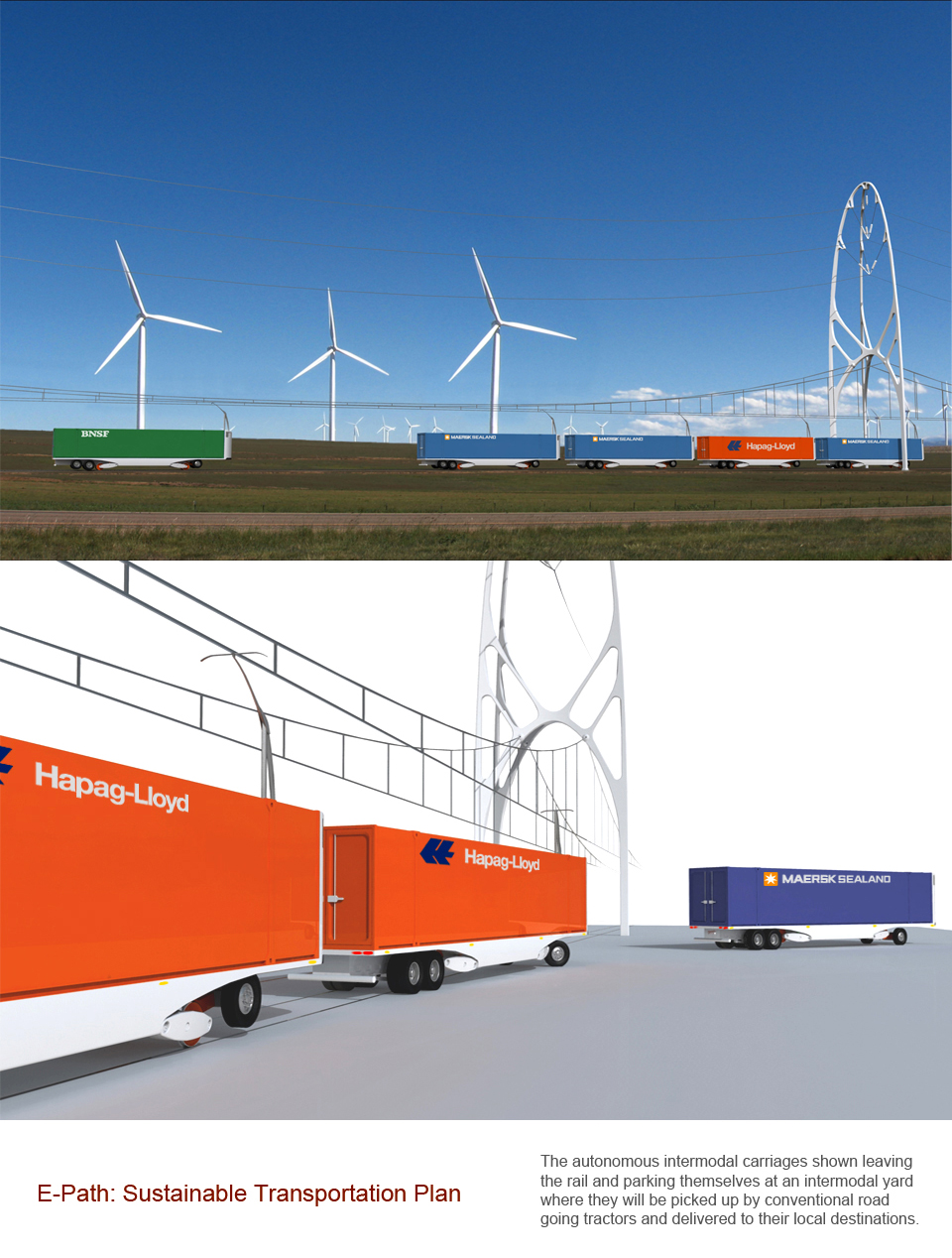 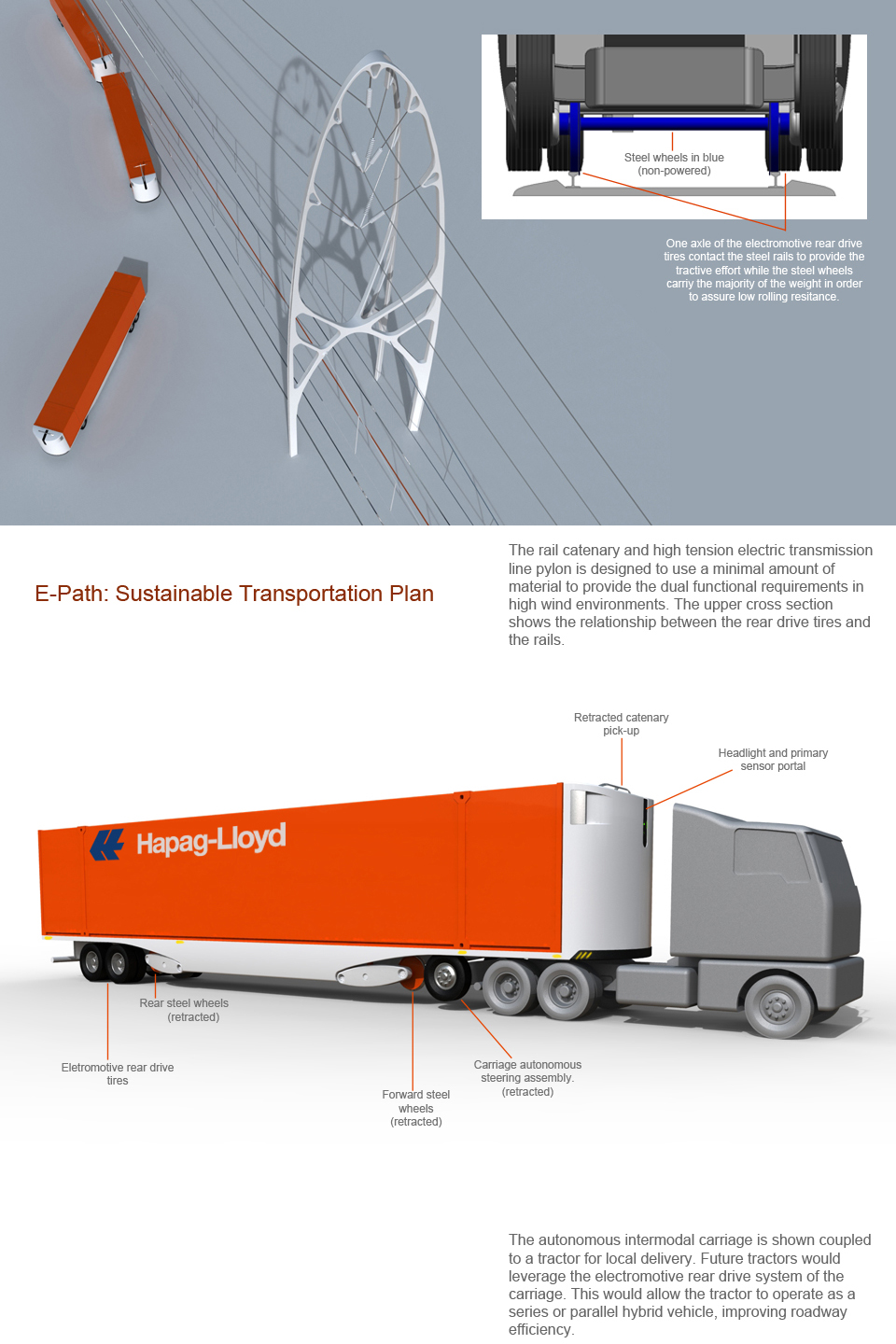 E-Path is a concept to facilitate electrification of the North American rail network while providing the right of way for the electrical transmission infrastructure needed to access the large amount of wind energy in the center of the continent. It then leverages the electrified rail network to provide an evolutionary path to fully autonomous intermodal rail service as well as a path to electrification/hybridization of commercial trucking. The intermodal carriages carry their own electric drive train that powers the rear set of tires. 4 deployable steel wheels carry the weight when on the rails. Initially the carriages would be pulled on the street with conventional tractors. However, next generation tractors would be developed that would leverage the electromotive drive train in the rear of the trailer, and in doing so provide a more efficient form of motive power.

The carriages draw power from the catenary through a deployable pick-up assembly housed in the front of the carriage. A relatively small battery pack would allow the carriage to move under its own power when entering or leaving the rail at the intermodal yard. The rear tires of the carriage are powered via electric motor housed near the wheels. 2 forward tires are used to steer the carriage when it is under its own power and to hold up the front end of the carriage as it waits pick up by a tractor for local delivery. The 4 steel wheels are deployed when the carriage is over the rails and the tires are retracted to transfer the load from the tires to the steel wheels. The amount of weight on the tires is automatically modulated based on the need for traction. This mitigates the amount of friction loss induced by the tires. This variable traction system would also accommodate regenerative and emergency braking. On tracks that approach a railroad crossing, the addition of a curb on the outer sides of the rails running a maximum train length before the crossing provides an additional means to stop a large group of carriages running in a close pack. In the event the lead carriage senses an object in the path after the gates are down it would send a signal to all of the carriages in the caravan to begin emergency braking. This would drop all of the tires down into contact with the curb thus providing a stopping distance comparable with a highway truck as opposed to a train.

The autonomous carriages would negate the need to compile and break down trains at the switch yard. Intermodal yards can now be nothing more than a spur track and a parking lot. As carriages enter & leave the rail line at more numerous points, greater economic efficiency would occur because of improvements in timing and location. This would induce a financial incentive that would drastically reduce the amount of long haul trucks on the highways, thus greatly reducing the environmental cost and improving public safety.