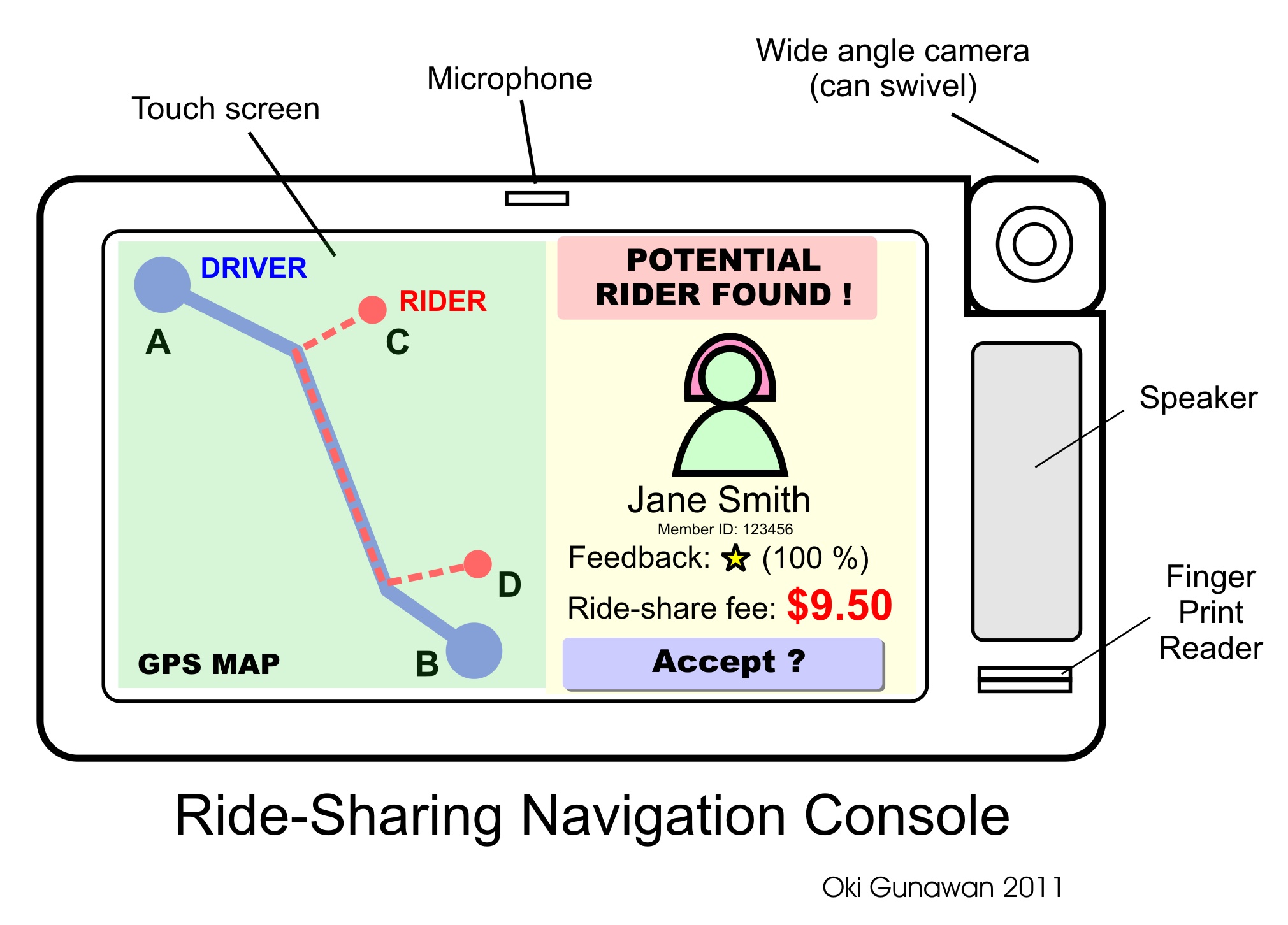 The grand objective of this invention is to minimize traffic congestion problem everywhere and to deliver savings in time, fuel, productivity and mental well being of the society. With increasing population, convergence of demographic towards urban areas and increasing fuel costs, traffic congestion problem will exacerbate over time leading to greater economic losses to our society.

Various ride-sharing program have been pursued but none becomes widespread and popular due to lack of real-time and on-demand management of all the ride participants. This invention harnesses the ubiquity of various mobile computing devices to realize an intelligent and on-demand ride-sharing system infused with auction-style transaction management to ensure efficient functioning of the system.

1.A Driver enters his route from point A to B. He can adjust his fee based on miles traveled or time for the ride-share.
2.A rider enters his route say from point C to D. He enters the maximum fee that he wants to pay for the trip. The cloud server will execute proxy bidding process to find any possible match with the lowest cost.
3.The cloud server perform the ride-share matching in realtime that satisfies various constraints such user preferences and cost.
4.Once a match is found, the RSN console displays the potential rider's picture, his feedback rating and the fee for approval. Similarly for the rider, his smartphone displays the driver and his car for easy identification during pick up.
5.Once both party approved, the driver pick the rider and drop him off in the destination.
6.At drop off the financial transaction is closed that occurs online.
7.Each users leave feedback to each other to rate their experience.

1.Drivers and riders have their own feedback ratings
2.Utilize social network. There is about six degree of separations between any two people. The system can harness the online social network to determine common information between the driver and rider to enhance the user experience and increase the security.
3.Drivers and riders could enforce their preferences e.g. based on gender, feedback rating, location, age etc.
4.During pick up, the RSN console and the smartphone of the drivers are paired using eg bluetooth for identity verification .
5.To prevent a misused of the driver's RSN console or rider's smartphone we use finger print authentication or password /pin protection.
6.To add another layer of protection, pictures of both driver and rider are taken during ride-share. The pictures are uploaded directly to the central server to prevent tampering.