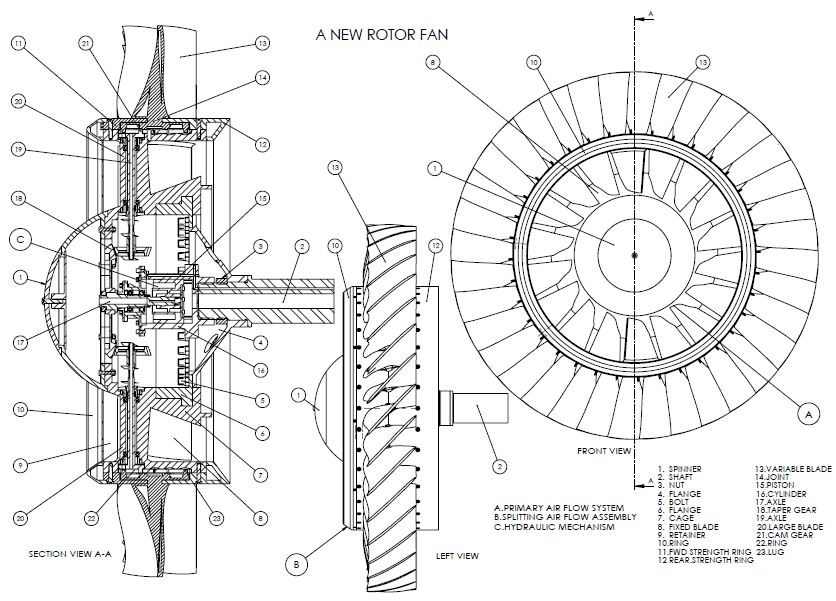 Now a turbofan jet engine is produced with compressor fan blades which are rigidly fitted to a single row on the front flange of the fan shaft. The best turbofan engine today make of 40% potential energy stored in the fuel.

It is known the research and development efforts, mainly focused on the next generation of turbofan engines, for decrease fuel consumption.

The operating characteristics of turbofan engine can be improved by adopting a new constructive solution presented in the figure. Best performances are obtained by changing the blade angle of secondary air flow in relation to maintaining constant r.p.m. speed, without  affecting primary air flow characteristics. Changing the incident angle of the blades of the secondary air flow improves the aerodynamics air stream and allows increased load fan stage.

This constructive solution is added to world efforts to improve the performance of turbofan engines.

The blades of secondary air flow are actuated simultaneously with two axles coupled to a taper gear of a hydraulic mechanism with distribution interface controlled by a speed transducer and an electronic box.

Constructive solution is shown in the figure.

The rotor of fan stage with variable blades provides significant advantages over the classical fan, including;
• Variable blades in the secondary air flow allow growth of thrust engine;
• Specific fuel consumption is reduced because the thrust engine increases;
• This constructive solution allow convert between 50%-60% of fuel’s energy into propulsion;
• The cage and blades from the primary system ”A” of air flow are cast of material composite with carbon fiber;
• This concept allow weight loss using titanium alloys and composite materials;
• Constructive solution of the figure shows that in the secondary air flow can be mounted double the number of blades as the primary air flow or the same number of blades, but with a higher chord for increase the load.