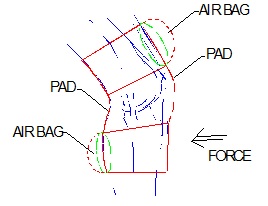 Every year, about 250,000 cases of torn knee anterior cruciate ligaments (ACL) happen in the US alone, and they all need reconstructive surgery and a long recovery time. In the NFL, they account for one in six injuries. We only hear of such injuries about famous athletes like David Beckham or Tiger Woods, but female athletes have an even higher risk of ACL tears than men and kids. To my knowledge, this never made the news. It is a leading injury concern according to CDC statistics and often times is a career-ender. The proponent did a Quality Function Deployment (QFD) study, which unveiled important inherent opportunities to develop an active knee brace: the force that can cause ACL rupture is between 1700 and 2200 N and is limited to a solid angle of only about nine degrees. Translation: by rapidly deploying two small airbags (above and below the knee), the load on the brace wearer's ACL can be reduced to well below the ACL's tensile strength (which is about 38N/sq.mm), and, even more importantly, by deploying the air bags only when the measured actual force exceeds the safe limit ONLY WITHIN THE CRITICAL SOLID ANGLE, we can optimize the design, while also preventing false deployment during the course of practicing a contact sport.

How will it work? Six well-placed MEMS (micro-electro-mechanical accelerometers) detect the forces acting on the knee joint and a small battery-powered electronic device calculates the force applied to the ACL and its direction. If the wearer’s knee joint is subjected to a force that exceeds the threshold value within a critical solid angle, the air bags “kick-in” and make the leg bones move in the opposite directions, thus saving the ACL. The active knee brace should be reusable if the air bags did not deploy. Manufacturability: this project was a finalist on Toyota's Ideas-for-Good (see it here or look it up at http://www.toyota.com/ideas-for-good/technologies/THUMS.html) and it melds together mature technologies, (air bags, accelerometers, microprocessors), and new ones, (simulation, solids modeling), plus whatever exciting new things we will come up with while developing this new family of products. Marketing opportunities: we will start with a high-end product, for professional athletes initially, on a customized product basis, then, after the design is refined and the production volume reaches levels where the product can be sold profitably for under $200, we will develop a family of products that have fewer custom features, for everyone practicing certain sports.