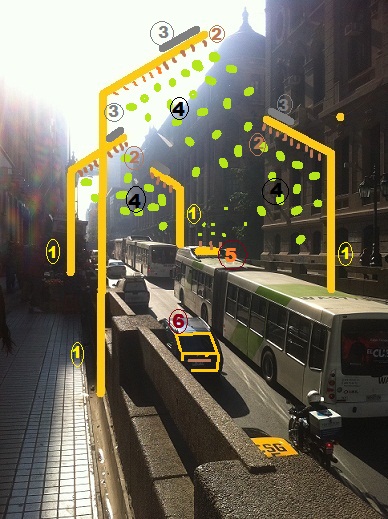 We know, by specialized studies, that pollution is one of the biggest "cancers" of our economic development in the big cities, that kills thousand of people around the world. A recent Report of the Chilean Environmental Ministery (2011) shows that 4,200 people died because of cardio-respiratory diseases due to atmospheric pollution and another 13,300 people were affected directly.

By other way, many scientific studies have been conducted over the years (mostly in Europe and Russia) that big levels of negative ions drastically and significantly remove pollutants from the air and benefits human health by their action against contaminants particles.

A must to preserve the health of people is to use ionizers with very low production of OZONE of less than 0.002 ppm at a short distance of the needles.

This system type against pollution with negative ions generation outdoors is not tested yet, but some studies have published that negative ions travel thousand of kilometers above the ocean. If we use mathematical simulation with CFD software to determine the ions trajectory in a street environment, we can define exactly where to install each generator for better action of the ions.

I think and I hope, that governments organization against pollution, World organizations like World Bank or PNUD, ONG's, will be interested to finance some experimental installations in different cities of the world and contribute to enhance people health living in polluted cities, specially elderly and childrens.

Another important point, is to make known the tremendous benefict of the negative ions in human health massively to the people and its use in hospitals, schools and other public facilities, especially in Europe and Russia (not many people know about this) and suggest to the governments its use.