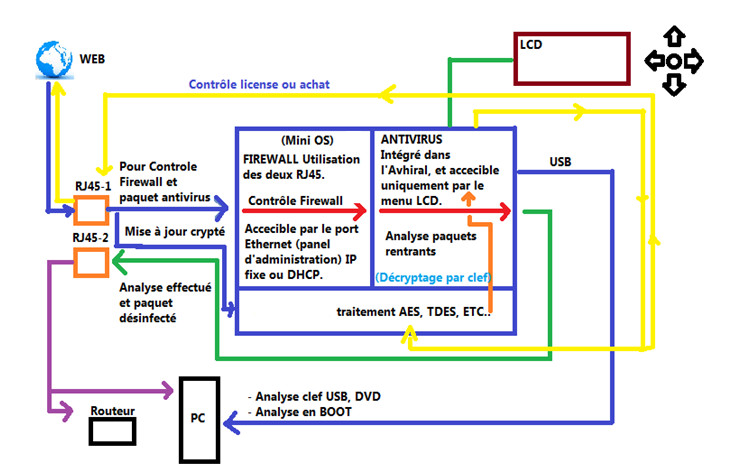 The AVHIRAL consists of computer system hardware, containing a protected memory, and a network firewall.

- 1) The usefulness of Avhiral is a way to have a UTM at a relatively lower than conventional systems dedicated to a public career.

- 2) The use of Avhiral, the device has a 32 bit RISC processor which opens a lot of opportunity and power. The operation of Avhiral can receive packets from the web falling between the router and the central units, they are systematically treated and disinfected.

- 3) The Avhiral have an integrated firewall which can be configured via the RJ45 Ethernet port with an admin panel, just as some routers local IP address or DHCP.

- 5) Using the USB part: the Avhiral can be started as a boot USB key analysis, it is possible to control all of the hard disk unit center outside of Windows. Usefulness of the second Avhiral, analysis of memory sticks, CD-ROM, DVD, may have perfectly integrated into Windows. This will analyze the slightest flaw on corrupted USB drive or DVD.

- 6) Last use of the device, may at any time have the link Avhiral, eg. you can very well incorporate a license encrypted with a complex algorithm. All this affords little protection against piracy of license generator. How the user will renew its license, directly through the LCD menu redemption license. License enforcement against piracy, some software in various sectors use a serial number. Through the Avhiral the license is fully protected and only opened by a private key embedded in the device.