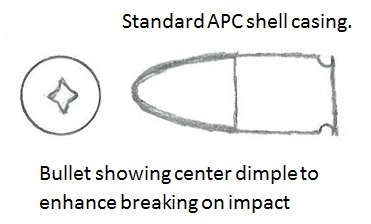 Bullet made with a heavily leaded glass that will shatter upon impact. Becasue the glass is leaded it can be located by x-ray and can be removed from a person struck by the bullet. Because it will shatter when striking objects it will not ricochet and cause collateral damage to inocent bystanders in a crowded area. This type of ammunition could be used by air marshalls because it will destruct instead of piercing the fuselage of an aircraft. This type of ammunition could also be used by other law enforcement agencies to prevent potential friendly fire casulties to people not directly in the vicinity of the fire fight where projectile carry could come into play.