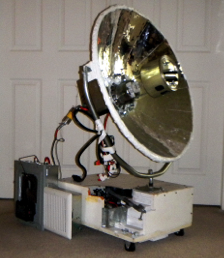 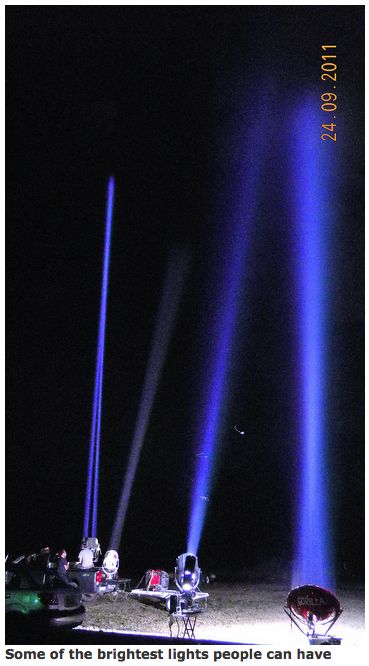 I have designed and built a working prototype searchlight that delivers much more light per watt than typical searchlights, is more pleasing to the eye, can be easily and environmentally built using off the shelf parts and materials, some being used in an exciting new way. My basic only 1,200 watt HMI technology searchlight built last few years, can be seen over seven miles in a crowded city. 40 Nighthawk lights, if lamped with 2,400 watt, (2.4 kwt), HMI bulbs, could replace the 40 searchlights currently in the Luxor Hotel in Las Vegas, (the Pyramid), that are using 7,000 watt, (7 kwt) Xenon bulbs. Plus the HMI bulbs and circuits are much less expensive than the Xenon bulbs which have to both be replaced about every 750 to 1,000 hours of operation.

The substantially lower replacement costs associated with the standard maintenance of searchlights is also plus benefited by being much safer than other technologies during shipping and handling. part of the efficiency is the inexpensive reflective coating that is highly efficient and easy and inexpensive to replace if needed, unlike typical reflectors which often have to be replaced.

Light that otherwise would be wasted to the front of the searchlight is bounced back into the arc chamber by a split spherical reflector which in turn shines most of the bulb's light onto the main half parabolic reflector, theoretically using up to 100 percent of the available light from the source. Most typical searchlights use only 75 percent or less of the available light...some as low as 30 percent!

Another efficiency feature is simply the way light is bounced. This reflector uses a principle of reflected light as being more 'powerful' after a perpendicular or close to perpendicular photon bounce. Light has less brilliance or power after bouncing like a skipping stone off a surface closer to parallel. This effect shows up after the light has traveled a certain distance. Lasers get the added advantage of this effect with their perpendicular reflections.

There are hotels, especially in Las Vegas, Office buildings, amusement parks, etc., that rely on expensive to buy and maintain searchlights for attention grabbing displays, that can greatly benefit from this searchlight and public approval for being much more environmentally friendly than searchlights in use now.

The beam will do it's job, but the 'eye' sore problem some people object to, is minimized by the 'soft' reflecting properties of this design. The Space station will be much more likely to photograph some of the more popular hotels using this searchlight and it's better beam, projecting into the heavens. So far, people react to the beam excitedly, frequently taking photographs.

I included my design for the 36 inch Gorilla that I posted to Candle Power Forum; was used as a CAD ad.