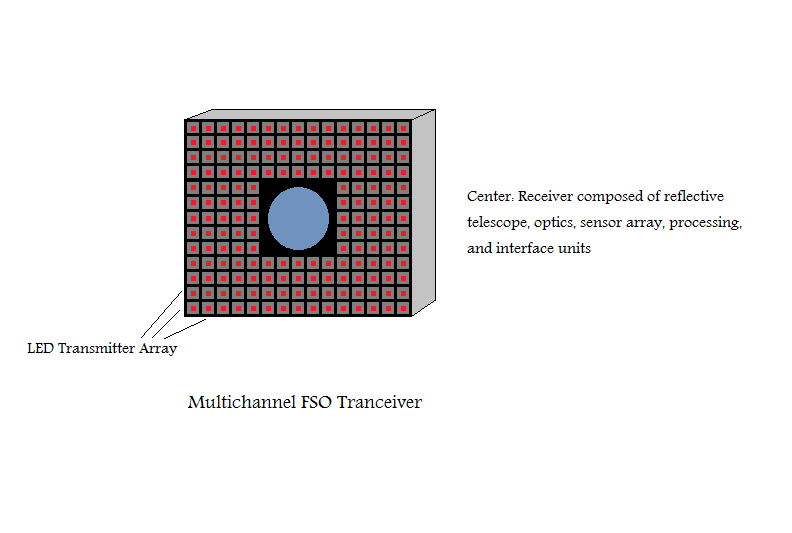 The most important precondition for maintaining a serious measure of freedom in any society is the availability of secure, decentralized communication systems.

In particular, a hard-to-detect backup physical communication infrastructure is essential, to be used for activists organizing in cases of widespread surveillance or repression, or for coordinating the defense of a city facing an invasion, in case the primary communication systems fail.

Typical FSO systems, however, suffers from the following shortcomings:

1- They have limited range of few kilometers.

2- The are highly directional, making it relatively tricky to set up and maintain alignment between sender and receiver.

3- It is trivial to locate one end of the communication line if the other end is exposed.

4- It is possible to expose the existence and the location of the light beam, and thus the communication link, by detecting scattering from objects near the receiver, or from particles in the atmosphere or particles introduced on purpose.

5- There is an upper limit on bandwidth defined by the maximum informationcarrying capacity of the single light beam, in the atmosphere.

The system presented here overcomes all of these limitations to varying degrees, and if set up carefully, the mere existence of the communication line becomes very difficult to detect.

The system has at its core the multichannel capability inherent in sensor arrays, and relies on optical telescope technology to establish an optical link by projecting an image of the distant emitter array on a photosensor array, rather than relying on a highly directional and potentially insecure beam. Light from the LED transmitter array therefore is steganographically hidden in ambient light, and is undetectable unless an observer happens to be in the line of sight of the transmitter and knows what she is looking for. A transmitter array set back from a window inside a room can communicate with a receiver without being detected by observers very close by. Communication is possible within a large cone if desired, relaxing alignment requirements. The telescope can also funtion as a directional transmitter/beam expander if needed.

The sensor array, in its cheapest form, can be an imaging sensor such as a CMOS or CCD high-speed camera. Existing image processing software can be useful in compensating for mechanical vibrations and atmospheric distortions, as well as coding/decoding transmitted data.

In this case, however, the shutter speed becomes a limiting factor on bandwidth.

A more costly but higher-bandwidth solution uses an analogue photosensor array where each sensor is read and sampled independently, with the possibility of processing the sensor data in parallel to increase efficiency, for example by FPGA-based DSP.

Less than ideal visibility conditions can be mitigated to some extent by changing the coding/decoding scheme of the transmitter/receiver arrays in order to increase reliability by sacrificing bandwidth.