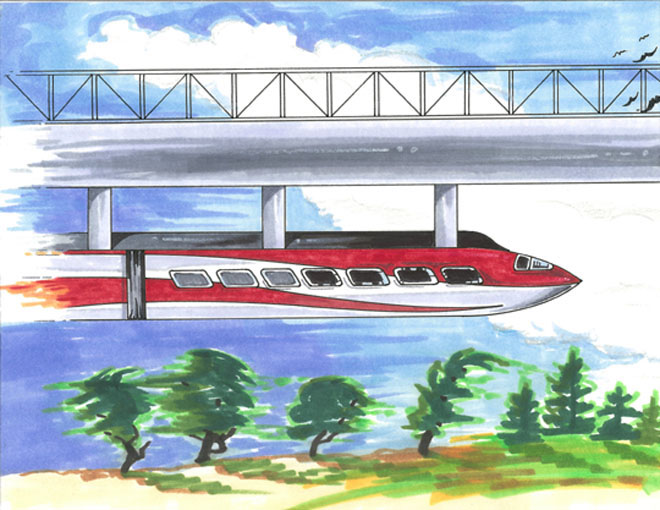 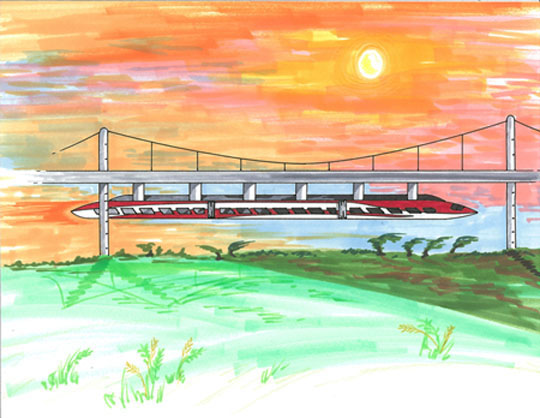 The concept of this system is an overhead lightweight magnetic levitated train capable of high speed in any type of weather, including icy conditions. It would be constructed with airframe technology to keep it strong but lightweight.

Its design is for intercity service, its market has a strong world wide potential. The high speed meglev system will use existing highway and rail right-of-ways to keep costs down. Being an elevated dedicated system it would not have to compete with the slower ground level transportation systems by speeding along above them. It would be impervious to most weather conditions.

The train's center of gravity is below its track allowing it to remain stable on curves with no fear of derailing regardless of its speed or the weather. Its levitating magnets are located in the rail tube out of range of passengers so there is no danger of them receiving magnetic radiation.

The support's system being considered for the meglev train would be towers that can be widely spaced over land or water. The rail tube from which the train is suspended would be supported by the towers. Being a relatively light weight train, the supports would require a much smaller load bearing capacity then a regular suspension bridge.

I feel if the necessary research and development did occur for this project and the meglev train became a commercial success this meglev system could develop into a "game changing" multibillion dollar worldwide market and offer a major profit potential to its developers and investors.