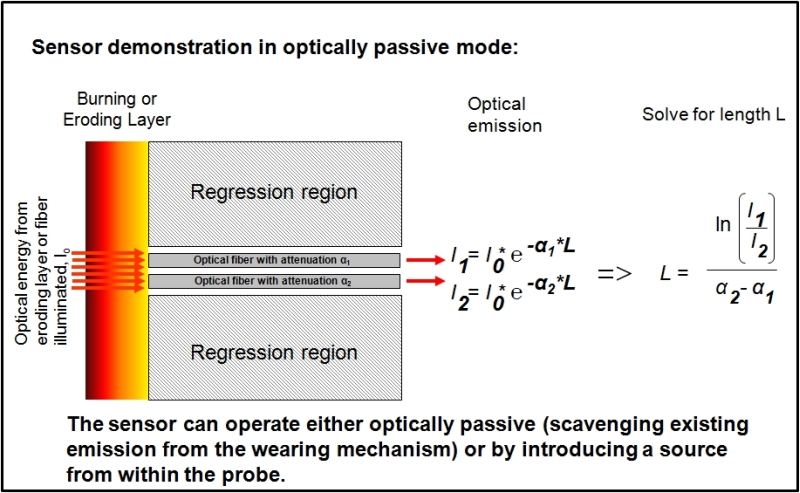 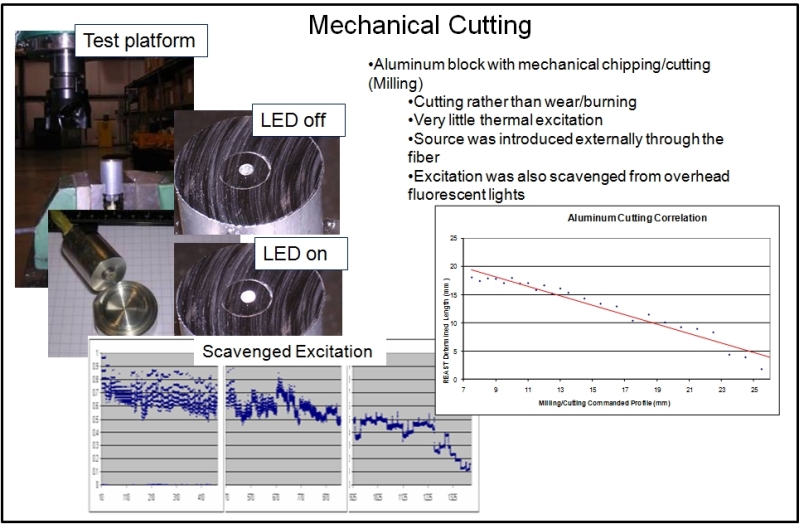 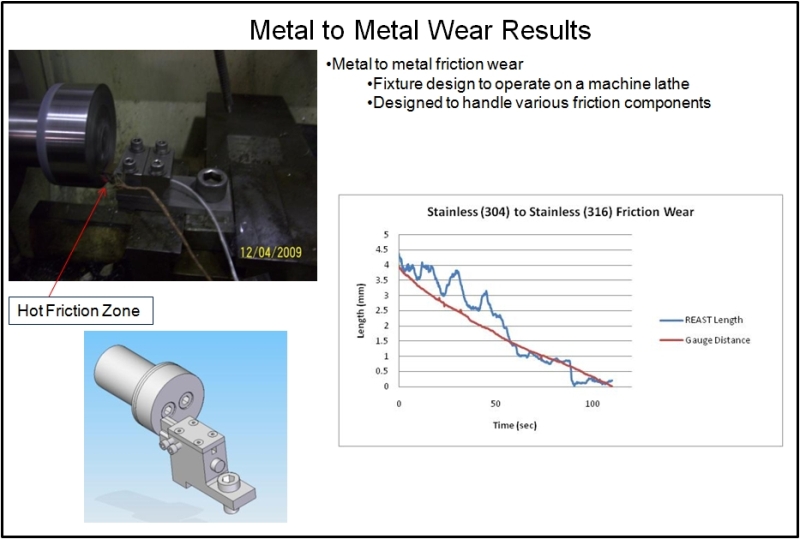 High temperature and high mechanical stress harsh environments can cause wear and erosion on exposed surfaces of critical components. Few sensing devices or methods are capable of performing intrinsic wear measurements, particularly in real-time and in situ. A fiber optic sensor has been developed that is capable of measuring real-time in situ regression, erosion and wear in a variety of materials under various conditions. The Regression, Erosion and Ablation Sensor Technology (REAST) was initially developed to perform real-time measurement of the regression of solid rocket propellants, but it has since been demonstrated in a wide range of applications, including: propulsion components, vehicle brake wear, metal on metal friction wear, and thermal-based insulator wear, with current testing for fluid-pipe erosion ongoing.

The operation of the fiber optic wear sensor is based on the transmission of light through an attenuating waveguide (e.g. optical fiber) as described mathematically by Beer’s law. The attenuation coefficient carries units of loss per unit length (e.g. dB/cm) and is an intrinsic property of the particular waveguide material. For high quality fiber optic glasses attenuation values are on order of a single dB/km. The attenuation of the fiber may be altered by a variety of methods to achieve values as high as 10 dB/mm.

The REAST sensor is formed using two optical fibers (waveguides) with differing attenuation coefficients. The fibers are embedded in a parent material and both it and the fibers are worn or eroded over time by the same physical process. In the simplest case, the thermal environment responsible for the wear mechanism also provides the light collected by the sensor. Typically the cross-sectional area of the fiber is small compared to the exposed surface of the host material and that the amplitude of the light collected from the wearing process is equal for the two fibers. This permits algebraic manipulation to solve the equations for length. The length refers to the fiber length, which will provide a measure of the host material wear rate if the two wear at the same rate. In practice, the tips of the two sensing fibers need to have differing attenuation coefficients only over the distance of expected wearing. The probes are typically formed from fusion splicing the attenuating regions upon a length of standard low-loss optical fiber. The low-loss fibers act as light conduits permitting the detector electronics to be located away from the wearing zone. Detection of the optical signal is done through photoelectric conversion within a photodiode. Silicon photodiodes have shown a sufficient response when the temperatures at the wearing layer surpass 350 oC. For cooler wear processes, two alternative options have been demonstrated. A detector sensitive to longer wavelengths (and thereby cooler blackbody temperatures) may be used for detection. Alternatively, a third fiber may be embedded into the parent material to backward propagate an exterior source of light (provided by a light emitting diode, laser, etc) that can be re-collected by the fibers comprising the sensor.