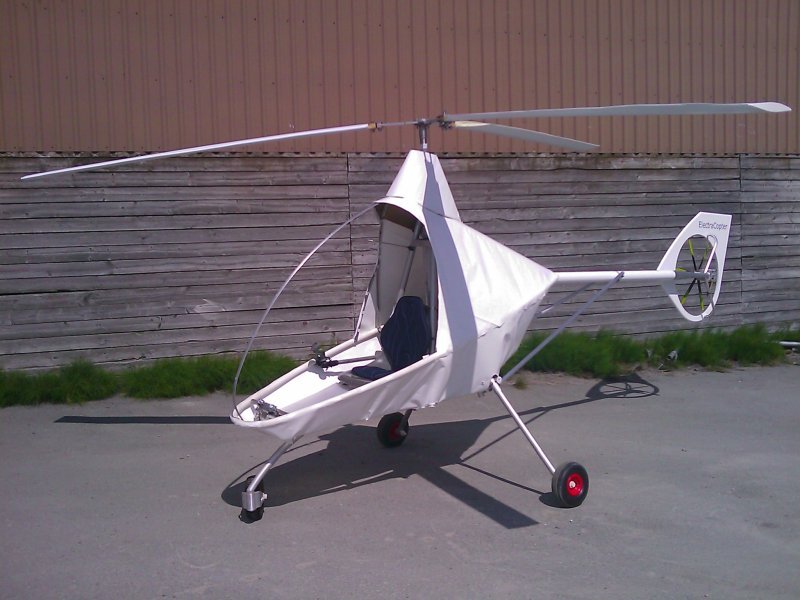 The ElectraCopter is a single-seat ultralight electric helicopter. At 150 lbs empty with batteries, it will fit into the 254 lb limit USA ultralight category for unlicensed aircraft. It can be potentially used in other categories and in other countries, depending on regulations and design criteria.

A mockup prototype of helicopter and motor has been built to verify weight is within 6% of projected figures. (Photo)

• This design idea updates 60 year old technology through simplification of design and hence, reduction of parts (KISS). Due to the semi-rigid rotor design, it also greatly reduces the time required to learn to fly.

• The most unique benefits of this design is that its self-generated power (windmilling and solar) can connect to grid or home power. It provides inexpensive helicopter flying; $22/hr reduced to $2/hr. It produces no pollution, is much quieter and easier to fly. Highly reduced noise signature to people on the ground. Aircraft 6061 tubing is used throughout but alternate, ecological materials such as bamboo, hemp, mahogany and silk as composites can be used.

• The main improvement over conventional designs is the elimination of the IC engine, with its associated noise and pollution, fuel cost and flammability. No carburetor icing or altitude power loss. No warm up or cool down period required. 90% reduction of engine related vibrations, resulting in low airframe and pilot fatigue. Major reduction in number of moving parts, meaning more reliability and safety. Much easier to fly. Doubles as a wind generator. Folds up for storage.

• The market potential is 5,000 units worldwide before market is saturated and the advanced, certificated two-seat version can be introduced (10,000 units+).

• The helicopter works by means of a solid state battery, powering a 20 kW electric motor acting as motive power (and generator) with fly by wire electronic controls and servo flap blade actuation. Yaw is governed by piezo gyro and rotor speed control by microprocessor. Triple redundant military spec computer control chips for safety. Tail rotor is a separate, directly coupled motor to a fenestron protected tail blade assembly. A ballistic chute is an option. Instrumentation is a HUD in the helmet – no console.

• Extensive use of subcontracted parts that are computer NC fabricated will simplify production. An in-house assembly line with trained, skilled labour will ensure aircraft standard procedures are followed. Little or no welding is required.

• Production cost would be 50% less due to fewer parts (total of 30 moving parts) and simplified construction methods. This allows for more features to be incorporated as standard equipment, including a three-tone paint job. Flight training will be included in the $45,000 US price tag.