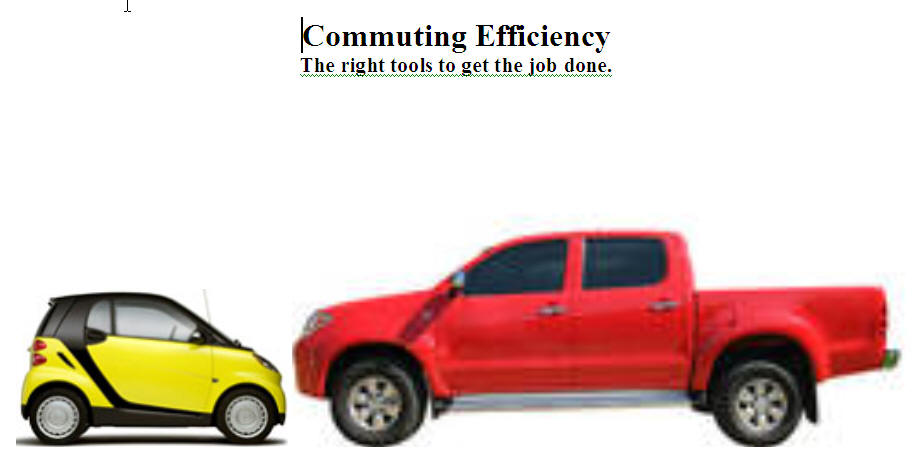 A practical system of ride sharing has been developed to overcome the inherent problems with car-pooling and mass transit. Using the proper vehicle for the highway and another for city and neighborhood use enhances safety. Fifty percent (50%) or more reduction in commuting costs* is realistic using standard existing vehicles.
*Estimated costs using Edmund.com vehicle operating costs.

With the advent of high fuel and operating costs a demand for better mpg has lead to the development and availability of mainstream electric, hybrid, and fuel-efficient vehicles. This trend has forced designs to become smaller and lighter to meet the mpg requirement. Safety then becomes compromised when these small vehicles are interspersed among large trucks and SUVs at high speeds. There has been a great reluctance among the public, and rightly so, to commute on high-speed highways with these small fuel-efficient vehicles.

The concept of using a non-commercial crew cab pickup or van and loading small vehicles now available “off the shelf” for city and neighborhood use on a trailer for the highway is a disarmingly simple ride share commuting arrangement has safety and cost advantages. The innovation of this system is to market a totally proven system with real world data to motivate its use. As shown by cost evaluation** three commuters towing two city vehicles results in a cost savings of fifty-two percent (52%) or four commuters towing three city vehicles, sixty percent (60%). This plan provides a personal vehicle to use at anytime for everyone, and everyone is in a large vehicle for the highway portion of the commute with comfortable seating. For example, 3 smart cars and dual axle trailer has an approximate gross towing weight of 9000 lbs., which allows non-commercial use with existing equipment.
*Reference attached costs trend.

To prove the system a one year pilot program in the Orlando area is planned to begin in September 2012. The program will consist of a class 2 crew cab (4 door) pickup pulling a tandem axle trailer with three small vehicles. Data will be collected automatically using available data loggers plugged into each vehicles onboard data port (OBD). Each workday the group will meet and load the small vehicles on the trailer, commute to the downtown area then unload. They do the reverse at the end of the day. Options are open as to any arrangement desired. Feed back on ease of use, expenses, and how the system is actually used will be closely tracked. If someone must work late or leave early the small vehicles will have at least enough range to complete a one way commute on its own on secondary roads. The program is asking for participants to test this concept. Qualifications include a commute between 25 to 50 miles, I-4 east, and a good attitude. Flyer included promoting participation.

Business opportunities may include Internet ride share arrangements or equipment supply through existing dealers with specialized trailers for ease of use.