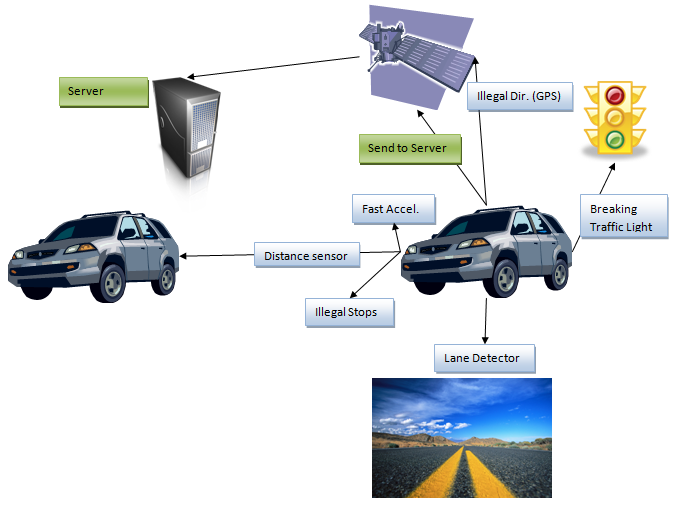 Here in Egypt, traffic jams are a major problem. ATC offers a solution for this problem. It looks into the problem from a different perspective. The idea is to install an electronic system on each vehicle. This system will detect illegal movement (cross lanes frequency), illegal driving direction, breaking traffic lights, fast acceleration, illegal parking, and short distance to front vehicle. Some of these are already included as safety features in modern cars. And some are there by default as common sensors. The rest of them will be implemented using computer vision/Artificial Intelligence techniques.

The system is composed of a central control unit which is connected to car default sensors (Speed, Acceleration, GPS, Safety sensors) and added sensors for detecting the other illegal actions. This unit will be responsible for fuse the sensors readings to decide whether the current state of the vehicle is illegal according to stored rules. If it was illegal state, the central unit will send current state to central server under government supervision with specific vehicle data to identify it along with illegal action type. The server will store this info so when the vehicle owner go to renew its license, all related fines will appears instantly.

The server is logically one unit but can be distributed on several regions.

This system can be funded from collected money from fines itself. And must be installed under government supervision only. It can be installed and maintained when renewing vehicle license. The system will have security protocol to prevent illegal tampering or removal of the system from the vehicle.

The communication with the server will use GSM and SMS to send data to server from the central unit.