Gesture Based Navigation for Powered Wheelchair 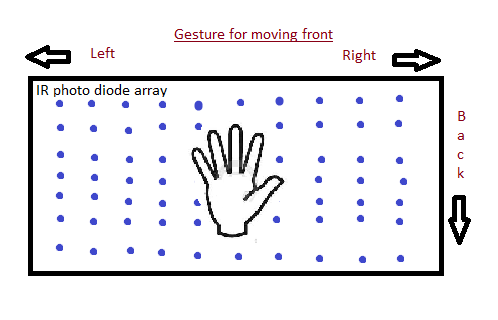 In this era of fast growing medical and health facilities, there are still a considerable amount of people who are paraplegic; they are either born or became so in their lifetime. These people find it very difficult to move from one place to another or need to depend on others most of the time for the same. Obviously a wheelchair is the best option that will help them greatly, but often, a quadriplegic person may not be able to handle a wheelchair easily. They have to extensively depend on other people as they cannot move a wheelchair on their own and often become bedridden.

Many powered wheelchairs are commercially available that are either too expensive or may not be comfortable for the user. Joystick controlled are the most common ones. It may be very helpful to a person with a leg impairment, but a person with nerve impairment or one with muscular problems may not effectively use such a wheelchair as they cannot apply much force on the joystick, thereby the problem of locomotion of such people remain unsolved. Also, prolonged use of joysticks can create numbness and soreness in the hands.

The idea which we propose is a gesture based, particularly hand gesture based, wheelchair. Here the user need not touch any device or controller, such as a joystick to control the system. Our hand gestures will do the job. A photo diode array detects different gestures, from the difference in light intensity in various parts of the array.

One of the advantages is that the user needs no beforehand training to operate such a system. All he/she has to do is to show a particular gesture to the wheelchair and the system designed will recognize the gesture and move the wheelchair accordingly. This makes them highly independent and comfortable. An additional feature that can be added to this system would be the auto- navigation system in which the wheelchair automatically moves to the desired location, say inside a house, once the destination input is given. Destination input can be given through a keypad.

Other than gesture recognition and automatic navigation, certain modules are involved in the system for the safety of the user. An obstacle avoidance system that avoids collision with obstacles, if the user loses control over the wheelchair and an emergency alert module that informs others once the user is in need. These are developed from basic and cheap sensors.

Such a system, when commercialized, will be a great innovation as the existing technologies are either too expensive to afford or may involve much complexities. The system proposed above has a low cost implementation. This can be very well used in hospitals and old age homes thereby reducing the need for assistance from other people.