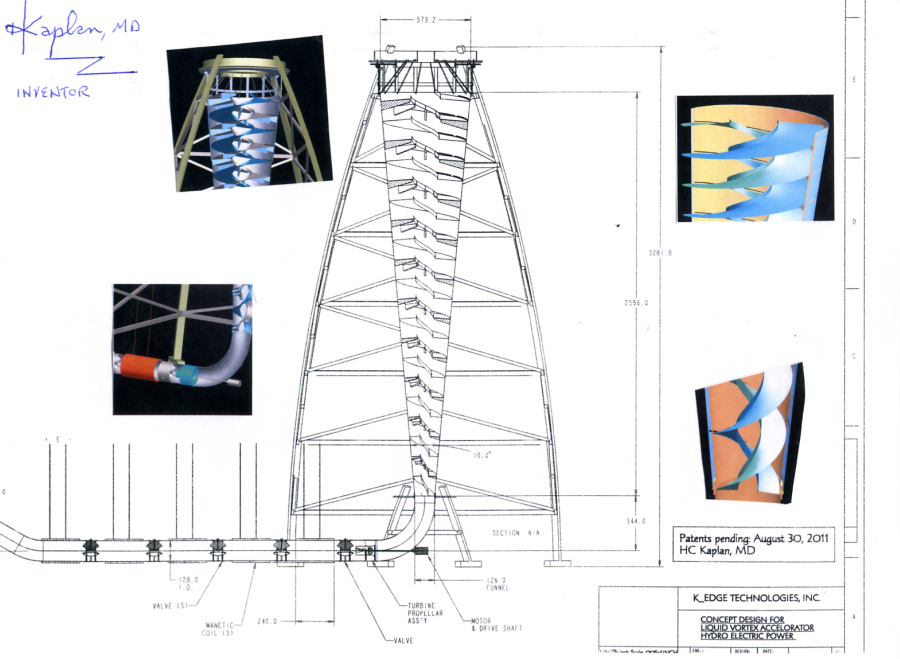 "Kaplan Crystalline 'Room-Temperature' Superconducting Alloy Wire" is wound into large coils which can be “charged” to create large, high magnetic field, “perpetual electromagnets.” Either fresh or salt water can be easily compelled into high velocity and high momentum vortex flow within the electrically-insulated center of such solenoids, either by unique funnel-shaped vertical accelerators or by “vortex-inducing” motor-driven propellers or by pumps with attached “vortex-inducing” nozzles.

Such a liquid vortex flowing through the magnetic "B" field created by such a solenoid will intrinsically cause a significant mass of electrically conductive water to orthogonally cross the superconductive “B” field lines as the water traverses inside the electrically insulated pipe around which the solenoid is wound, thus causing a significant DC potential to be generated between electrically conductive cylinders on either end of this insulated pipe, which can be used externally, and/or to power vortex propellers at either end of a series of said internally-insulated, superconductive coupled-solenoid-tubes.

The advantages of the “negative pneumatic resistance” created by the vortex motion of the water, along with the power extracted from the field by this “rotating liquid armature” as it traverses the static magnetic field, will create a perpetual flow of liquid and of generated DC power, that appears to defy “the second ‘law’ of thermodynamics.” This “law” however, does NOT APPLY TO THIS SYSTEM, partly because the centripetal vortex energy operates outside of the conventional Carnot theory, and because the “oppositional Counter-EMF-eddy-currents” found in conventional generators is dissipated as heat in micro-eddies within the flowing water, therefore, CONVENTIONAL COUNTER-ROTATIONAL FORCES AND LOSSES ARE ABSENT.

Various Preferred Embodiments of these Inventions are further remarkable in that the constant DC superconducting current in the series-superconducting-solenoid coils can be modulated at various AC frequencies and at the “HCKAPLAN-Discovered Hydrolysis-Enhancing Electromagnetic Resonant Frequency of Water,” if a loop of these series-connected coils is wound as a secondary around a torroid transformer which has one or more “primary coils” attached to one or more appropriate frequency-modulated AC power sources, meaning that said liquid vortex flowing through said series-connected solenoid coils can be used to generate not only DC power and self-propulsion of the liquid, but also potentially AC power and H2O hydrolysis gases as well.

Preferred Embodiments include the use of said power for “free-energy” boat and barge propulsion as well as for Doubling to Tripling the net power output of Existing Hydroelectric Dams via (a) increased pressure created at the mouth of each conventional AC turbine by the self-energizing liquid vortex as well as ADDITIONAL POWER OUTPUTS from (b) the DC power created by the high momentum liquid vortex in the large (14’) diameter superconducting series electromagnets and (c) the resonance and DC created hydrolysis gas outputs.