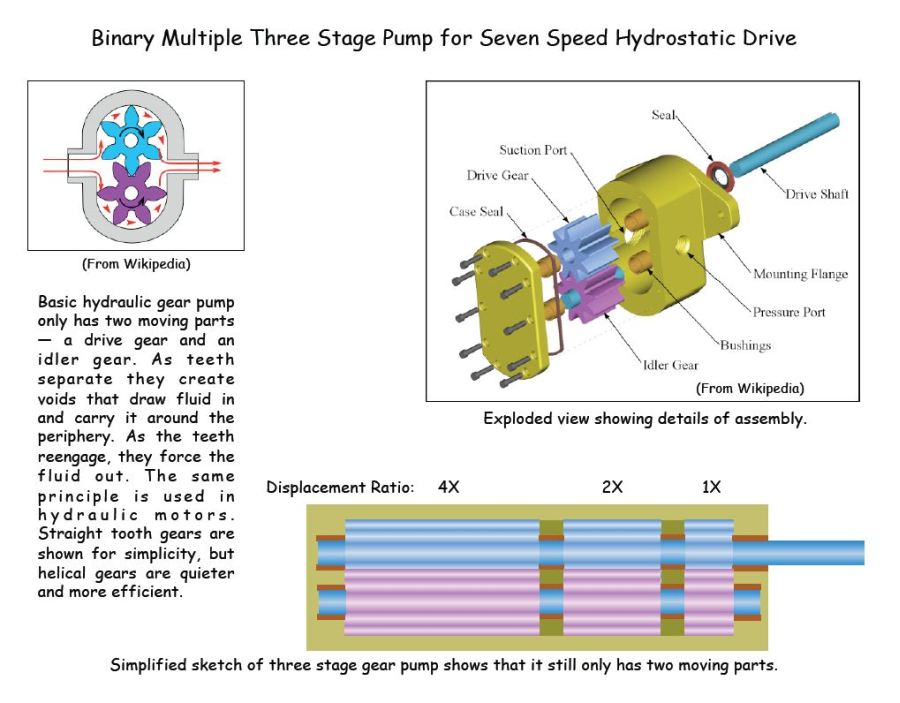 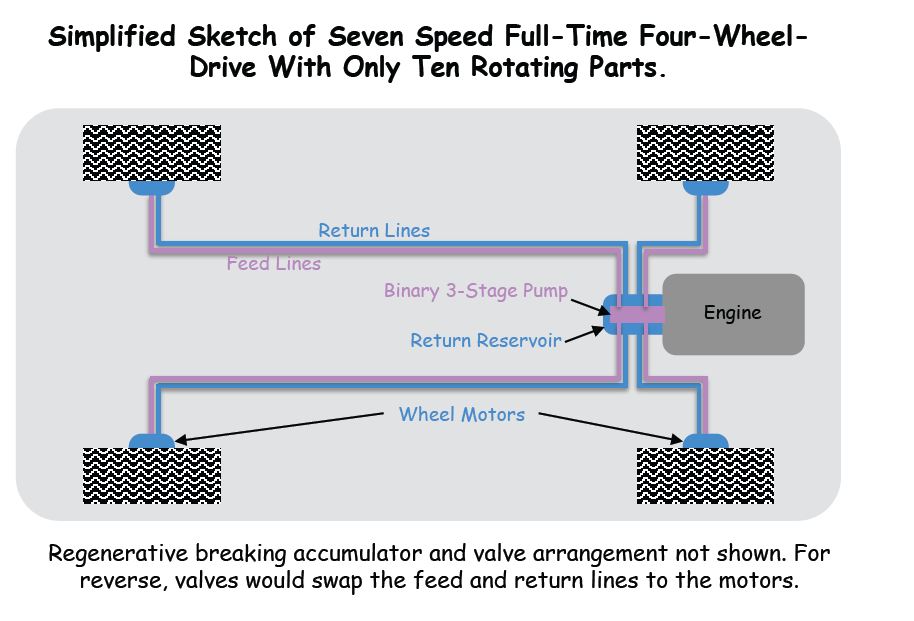 A full-time four-wheel-drive system for a motor vehicle is big, heavy, expensive, and inefficient. It requires a clutch, transmission, three differentials, two drive shafts, and four axles. The transmission contains dozens of moving parts, and each differential includes another half dozen. To get to the wheels, the power must go through the clutch, transmission, and two differentials. Assuming that each unit is 80% efficient, the efficiency of the series is 80% x 80% x 80%, which equals 51.2%. Almost half the power is wasted.

I propose a smaller, lighter, cheaper, and more efficient seven-speed hydrostatic drive that requires only ten moving parts. In a hydrostatic drive, the engine drives a hydraulic pump, forcing fluid to hydraulic motors at the wheels. Hydrostatic drives have been used for decades on off-road machines, but they use big heavy expensive noisy variable displacement axial piston pumps.

My approach uses a novel “binary-multiple three-stage” gear pump with only two moving parts, plus three two-way valves, and a distribution manifold. It would be cheap, quiet, and only about the size of a shoebox. One moving part is a drive shaft with three fixed gears rotating together as a unit. The gears are all the same diameter and pitch, but are of three different lengths in the binary ratio of 1:2:4. Three more gears are fixed to a counter shaft, forming the second moving part. Baffle plates separate the three pairs of gears forming three pump sections with relative displacements of 1X, 2X, and 4X. At the outlet of each section, a simple valve can divert the flow into a manifold and out to the wheel motors, or back to the reservoir. No clutch is needed. A small accumulator would prevent abruptness.

Each wheel motor would be about the size of a standard roll of toilet paper and could serve as the wheel hub, directly supporting the wheel on its output shaft. A pinch-off valve on the return line would provide breaking. A large accumulator on the return line could provide regenerative breaking, storing deceleration energy, and returning it to the wheels during acceleration. Diesel-hydraulic hybrid vehicles been built that are more energy efficient than similar diesel-electric vehicles. Friction breaks would only be needed for parking or holding position on a steep grade.

The system proposed here would deliver up to 80% of the power to the wheels, allowing a smaller engine. Shifting could be manual or automatic. Regenerative breaking would further improve efficiency and acceleration. The compact drive would provide more interior volume and lower profile for greater stability and reduced drag. The combined effects of this drive system would roughly double the fuel economy of full-time four-wheel-drive cars, trucks and SUV’s while considerably reducing their cost.