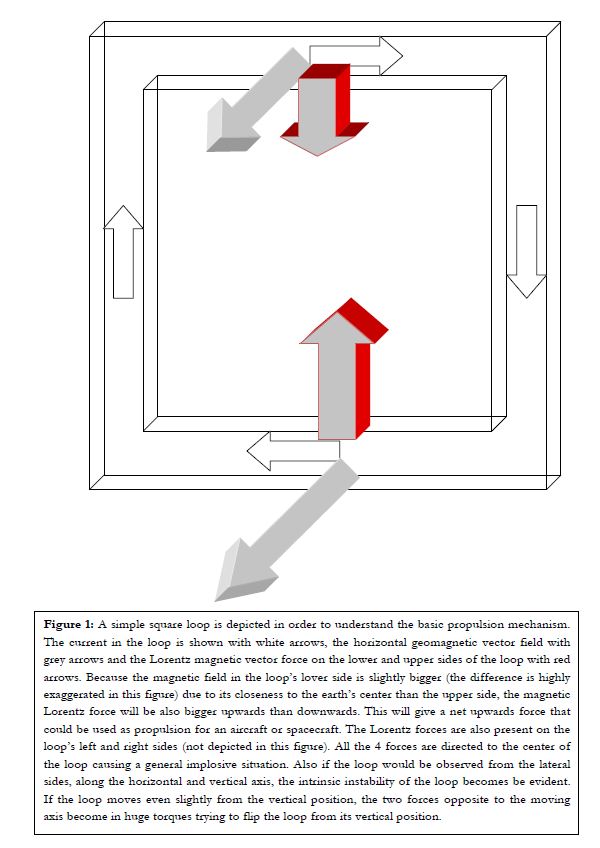 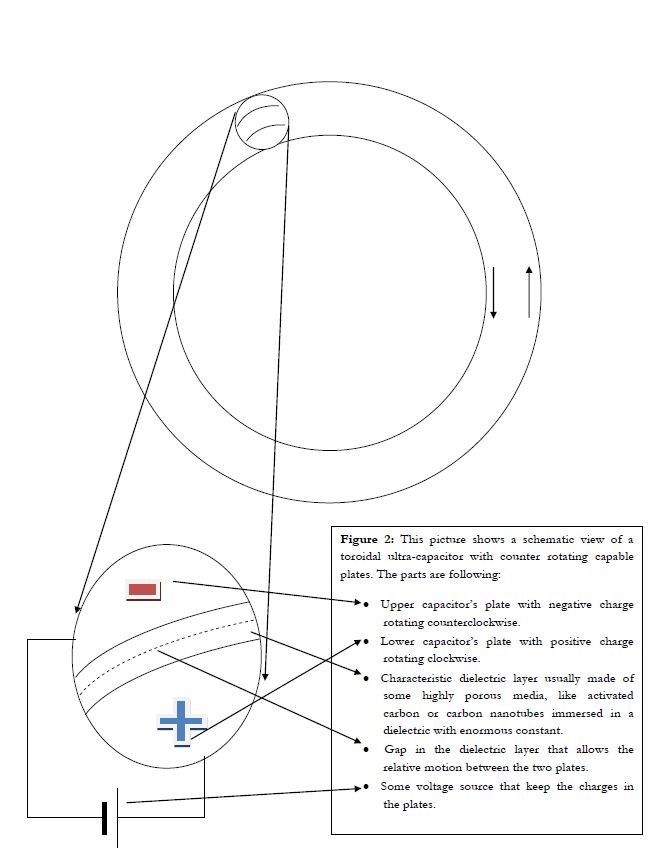 The Earth magnetic field poses a radial gradient, as any other physical field, however its magnitude is as low as .01 nanoTesla/meter. There are Earth zones where the geomagnetic field is totally horizontal. These 2 conditions enables a net upwards force in a closed loop of current (see the Figure 1) using just usual Lorentz forces for the calculation. However because the geomagnetic gradient is so small the amount of current needed to obtain any measurable net force is huge, of the order of Giga Amperes. Not to say the critical current enough to compensate the current loop own weight. Another problem is the instability of such a loop placed vertically in a horizontal magnetic field. Huge torques will be exerted trying to rotate it toward a horizontal situation. Also the currents exert a huge implosive force on each of the loop's sides.

Since the last 20 years the advances in the field of ultra-capacitors (aka super-capacitors) have reached the level of thousands of farads. However the voltage that such devices are capable to bear are of the order of volts. Nevertheless even 2 or 3 volts in a capacitor of 3000 Farads represents almost 10000 Coulombs.

The idea of this project is construct a ring shaped (donuts like) ultra-capacitor (see Figure 2). If such a capacitor is rotated around the ring's axis no net current would be observable because the currents due to the opposite charges compensate each other. However if the positive side is counter rotated respect the negative side a net current will appear. Rotation speeds of 30,000 rpm are feasible nowadays, then using such a device, currents of the order of .1 Giga Amperes are possible. The bonus of such a toroidal counter rotating ultra-capacitor is the angular momentum conservation which would stabilize the apparatus against the flipping torques. Also the centrifugal force on the loop will neutralize the implosive forces due to the currents. For a loop of 1 meter of diameter 10 or more Giga Amperes are required to produce 1 Newton of lifting force, however if the diameter of the loop is increased the current demands decreases. For a ten meter loop 1 Giga Ampere is necessary.

In conclusion, with the current technology and using a counter rotating toroidal ultra-capacitor the critical current for such a system's lift off is nearing the feasibility. A full functioning propulsion of this kind would have very attractive features; it could stay flying steady without energy consumption, it would recover the energy used to lift during the fall, and it don't needs propulsion mass. Using the International Geomagnetic Reference Field (IGRF) is possible to spot an ideal place on the earth surface where the geomagnetic field is totally horizontal and the vertical or radial gradient is maximal. Also in the outer space are magnetic fields with a gradient due to the solar wind, then this system can be used maybe even for spacecraft.