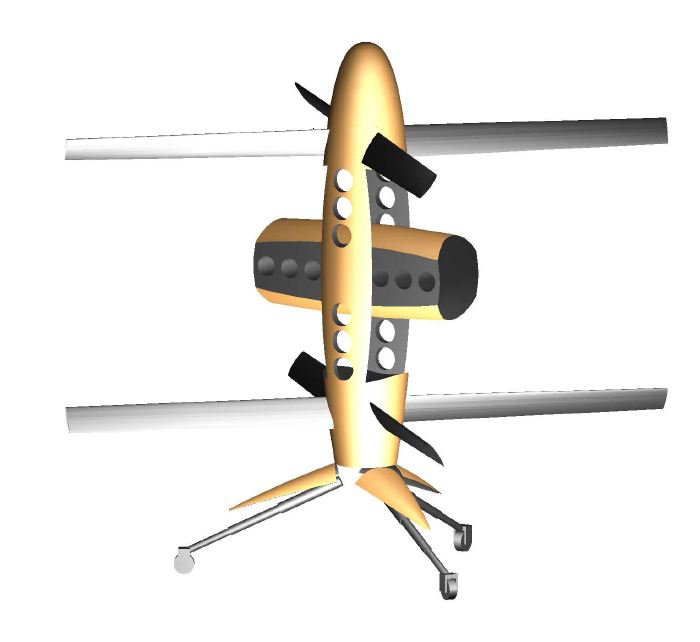 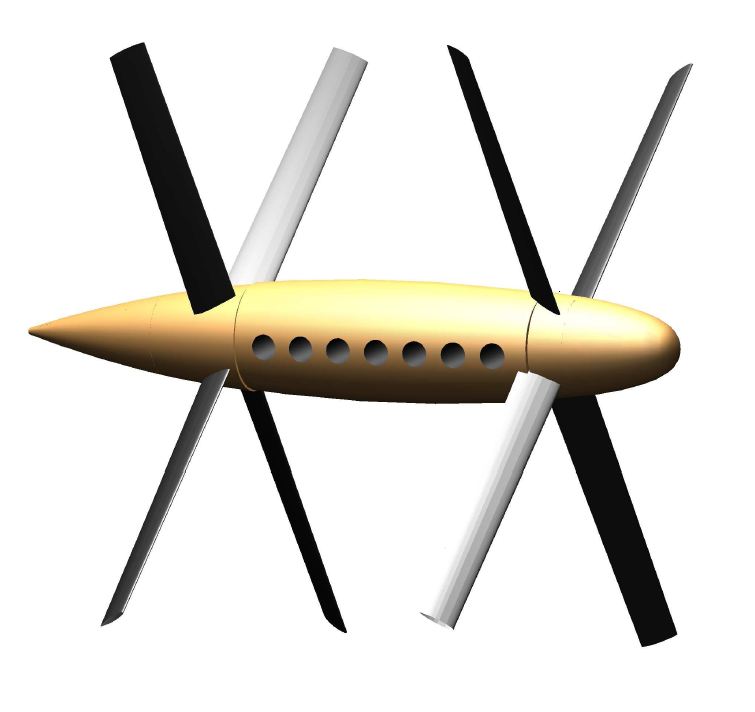 A new passenger-carrying aircraft design is proposed which will be able to efficiently move people at a speed of 300 MPH for typical distances of 10 to 150 miles. An aircraft of this type might be used to provide rapid transportation from numerous points in a metropolitan area to the local airport, or rapid transportation between any two locations in a metropolitan area.

This aircraft is a “tail-sitter”. In spite of its awkward appearance when it is on the ground, when it takes off and tilts over and flies with its axis oriented horizontally it is able to cruise with very good efficiency at relatively high speeds.

When the craft takes off with its axis vertical it will first climb vertically and then begin to tilt its axis in the direction of its planned flight and pick up horizontal speed as it continues to climb. This will continue until it is finally flying at its cruising altitude at a speed of about 200 MPH with its axis horizontal. If the total distance to be traveled is sufficient, the craft will continue to increase its speed to about 300 MPH. To land, the craft will first begin to slow down and will then pull its nose up. This process will continue as it looses altitude until its horizontal speed is zero, its axis is vertical, and it is positioned over the desired landing spot.

One way to carry passengers would be to simply provide each passenger with a tilting seat, but it is proposed, instead, that the main part of the fuselage between the two rotors be kept level during all the flight modes. This will allow a flight attendant to have continuous access to the passengers. In this proposal twenty passengers plus a stewardess are accommodated in seven rows. In each row there would be two seats on one side of the fuselage and one seat on the other.

An important aspect of the tiltplane concept is that it offers an aircraft with a relatively small amount of surface area. Very high subsonic flight speeds are possible, but for good flight efficiency a typical top flight speed of 300 MPH is proposed.

This new technology is important because it offers VTOL operation together with excellent flight efficiency when it is cruising. Compared to helicopters, tiltplanes offer much higher flight speeds and far better flight efficiencies.

Computer programs for analyzing this craft were written in BASIC by Ray Prouty.
US Patent #8,146,854 B2 was granted on this new concept on Apr. 3, 2012. A Canadian patent was also applied for; it should be granted soon.