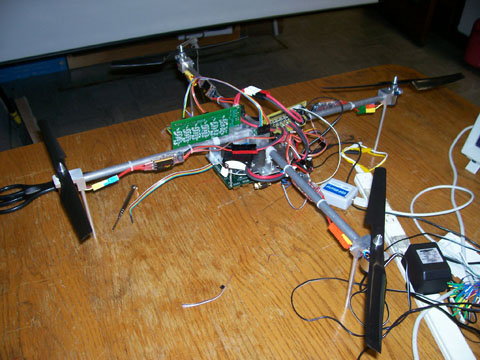 Design of underwater cum aerial quadrotor
The basic idea of having a quadrotor that can be used underwater and in air is to improve the operating environment of the quadrotor. The quadrotors can be coated from Ultra-Ever dry to make them superhydrophobic (which would make it effective underwater). When converting from quadrotor in air to quadrotor underwater, two of the adjacent rotors in the horizontal plane would be tilted by 90 degrees and become rotors in the vertical plane which would be used as thrusters. The rotors in the vertical plane then can rotate in vertical plane completely (360 degrees), perpendicular to the propeller axis .This is similar to the thrusters we have in space vehicle which can direct the vehicle in any direction. We need two rotors to be in vertical plane because of the extra thrust we require to overcome the resistance by water. These quadrotors can have a complete carbon fibre frame which makes them very light and durable. The batteries used would be Sulphur-ion batteries instead of normal Li-ion batteries which can store up to four times more power.

Marketplace Target:
This design mainly targets security and defense. Building contractors could consider them to be a one time investment and avoid unnecessary labor charges. Health and hygiene department to control water pollution.

Gesture control system:
Gestures can be used to control the movement of quadrotors. This would simplify the task of flying and would be extremely useful for quick maneuvers. A sensor would detect the hand gestures and then convert them into corresponding instruction code in the computer and feed them to the quadrotor wirelessly .

How Defense should use it:
Army/Navy should make a number of groups with each group consisting of a number of quadrotors. A person can then allot a particular task for a particular group, which would work as a team. For example: One group can be used for local surveillance, at the same time another group of quadrotors would transport heavy luggage to the base camp. This would reduce the time taken and overall effort taken by the people.

Defense application:
• Imagine a war situation where such quadrotors can be very useful to take cover underwater in case of an aerial attack.
• Under water and aerial surveillance and reconnaissance.

Other applications:
• At the construction site, for lifting bricks and beams.
• For local traffic control.
• Cleaning of underwater garbage by proper attachments to the quadrotor.
• Study of different aquatic flora and fauna.
• Could surely improve the security level near the coastline.