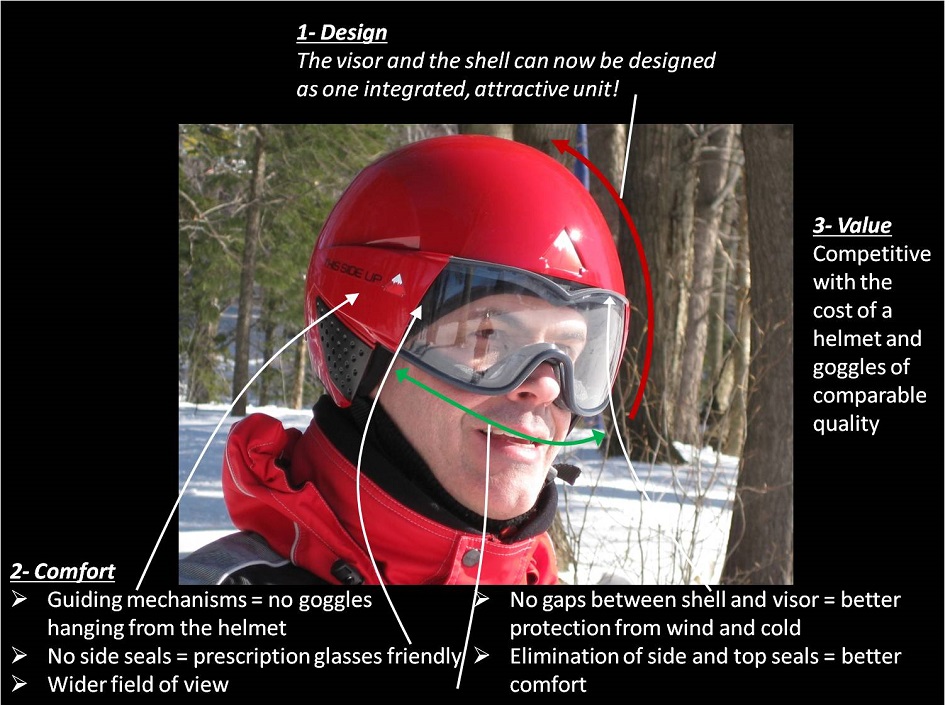 Product Description
Rocken’s first innovative product is the world’s first helmet with a fully integrated visor capable of sealing against the face of the skier. When deployed within the field of view, the visor seals against the face to prevent cold wind from seeping in.

Contrarily to motorcycle helmets where the visor pivots on a single transversal axis, Rocken’s patented helmet technology allows the visor to move along a precise trajectory, shaped as a “J” lying on its side. The visor is attached to a guiding mechanism that guides the visor along the trajectory which extends from a retracted position, close to the front of the helmet and above the skier’s field of view, to a deployed position within the field of view of the skier, where the visor simultaneously moves towards the face of the skier to seal, through a soft-foam seal, against cold wind intrusion.

Competitive Advantage
There are currently no competitor manufacturing any type of helmet that is directly comparable to Rocken’s helmet. The innovative design of the helmet and the focus on Key Features lead to the following advantages over the competitor’s products:

Rocken’s proprietary technology may potentially be applied to many types of helmets in various fields of applications requiring that wind or dust or other elements be prevented from reaching the eyes of the wearer, such as in alpine skiing, snowboarding, motorcycling (motocross, open-face helmets), snowmobiling, cycling, military, firefighting, law enforcement.

Business Model
Rocken is an advanced engineering and design firm. It develops innovative products, protects them through patents in the main markets, and provides licenses to equipment manufacturers either directly or through a partner. Hence, it builds its value based on intellectual property and makes its profits through licensing. Rocken extracts the maximum value of its innovations by using the technology as a platform from which improvements and variants are developed.

In 2012, Rocken signed a 4-years agreement with a manufacturing agent, FWD Concept sarl of Switzerland, on the licensing of its Rocking Lens Technology. FWD Concept signed with Bollé, a longtime customer, an agreement for the delivery of ski helmets using the Rocking Lens Technology. FWD Concept proposed a helmet design to Bollé while Rocken adapted the technology to the helmet. The Rocken logo appears on the lens guiding mechanism of Bollé’s helmet. Manufacturing of helmets is typically done by established manufacturing partners located either in China, Germany or Italy.

Advantageously, Rocken has no large-scale manufacturing facilities nor inventory. Operations only require minimum offices with computers and ideally a small prototype shop equipped with a 3D printer. Operation costs are therefore reduced to a minimum.

In the fall of 2013, Bollé will introduce, under the name Osmoz, the first ski helmet to use Rocken’s technology.