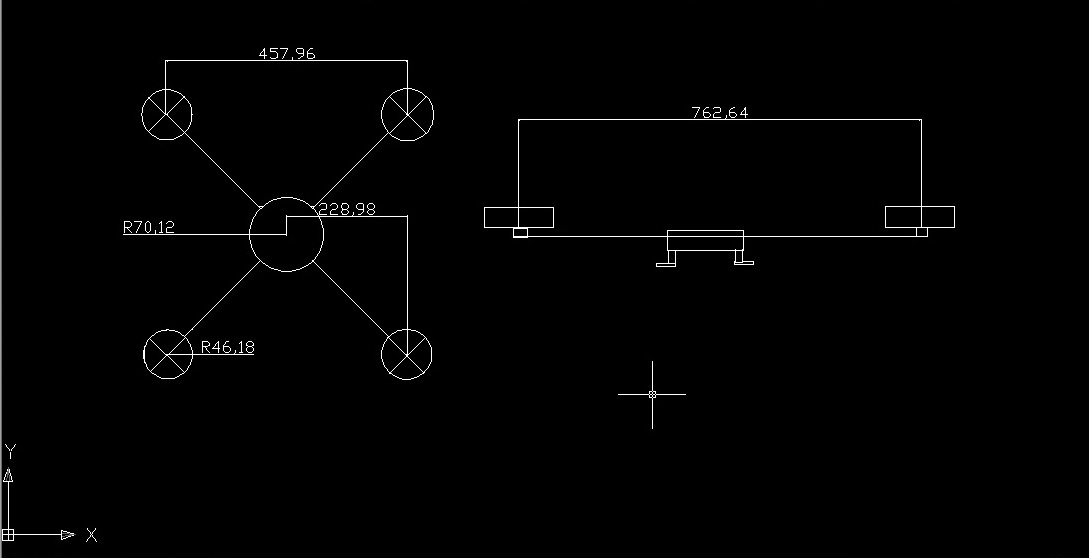 A quadrotor, also called a quadrotor helicopter, is a multicopter that is lifted and propelled by four rotors. Quadrotors are classified as rotorcraft, as opposed to fixed-wing aircraft, because their lift is generated by a set of revolving narrow-chord airfoils. Unlike most helicopters, quadrotors generally use symmetrically pitched blades; these can be adjusted as a group, a property known as 'collective,' but not individually based upon the blade's position in the rotor disc, which is called 'cyclic.' Control of vehicle motion is achieved by altering the pitch and/or rotation rate of one or more rotor discs, thereby changing its torque load and thrust/lift characteristics.

Early in the history of flight, quadrotor configurations were seen as possible solutions to some of the persistent problems in vertical flight. More recently quadrotor designs have become popular in unmanned aerial vehicle (UAV) research.

Current high-tech, complex military operations require a high degree of real-time target and mission-relevant information. In the past, manned aircraft with on board cameras and other sensors have had a primary role in airborne intelligence operations. More recently, however, technological advances have allowed unmanned aerial vehicles (UAVs) to carry out reconnaissance missions in the place of the conventional manned aircraft. For the purpose of this report, we use the Department of Defence (DoD) definition of UAVs: “powered aerial vehicles sustained in flight by aerodynamic lift over most of their flight path and guided without an onboard crew.” Quadrotors are nonfixed-wing rotorcraft platforms that utilize four propellers to achieve vertical lift and maneuver through the air.

Because its small in size quad copter is used in various missions conducted by the army and air force for spying and neutralizing various treats. The small size quad copter can enter any building, any place which cause threat to the society. These places include contaminated areas affected by the chemicals, nuclear radiation and building which is captured by terrorist.

By the use of quad copter installed with a variety of equipment one can easy control the above mentioned places with any loss of human life. It enhances the safety of an individual by covering its owner/controller who is operating these flying robots a far away from actual place of action.

Technical specification of our design:
In this project we have used heat sensors, proximity sensors, tactile sensor, GPS, and an infrared/night vision camera. These sensors enable us to operate our quad copter in hostile condition either for security or for safety purpose.

Conclusion:
Having four arms, a quad copter has a great ability to lift heavy pay load which may vary from size to size. These rotor arms enhance stability for the robot during flying. Object identification by image processing is major advantage of this project.