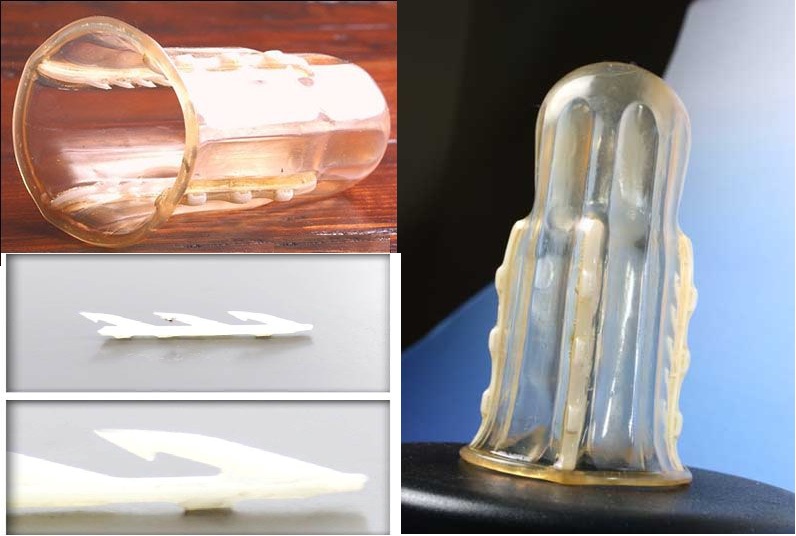 Sexual assault against women is increasing at an alarming rate world wide. Refer to the recent news and we can see the incidence of rape is rising in the US Military, South Africa, India, Haiti, Congo, Egypt,Sweden, UK, Pakistan, South America and most countries of the world.

Rape-aXe (RX) is a revolutionary and patented new device in the battle against sexual violence. It aids in the prevention of rapes and subsequent identification of the assailant.

It is the only device of its kind.

The RX system consists of a condom-like elastic sheath, which contains razor-sharp barbs. The woman inserts the single use device into her vagina, like a tampon, and it can be removed by her when she feels it is no longer necessary.

When an attacker penetrates the vagina, he enters the Rape-aXe “condom”. Upon his first withdrawal, the barbs attach themselves onto the skin of the penis and the rapist pulls the RX device out of the vagina.

The rapist is almost fully incapacitated by the pain caused by the embedded barbs, providing a distraction and allowing the woman a chance to escape.

The presence of Rape-aXe is not apparent externally, cannot be turned inside out or cause injury to the woman. There is little to no discomfort to the woman while it is in-place.

The sheath provides a barrier to prevent the exchange of body fluids from the attacker.

Functioning models have been developed by injection molding the plastic barbs, followed by a polymer dip process similar to what is used for glove or condom manufacturing. In mass production this can be manufactured cost effectively and sold for approximately 3 USD per unit.