The Phase Explosion Injection for an Ultimate Motor Efficiency 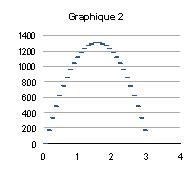 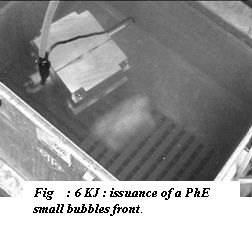 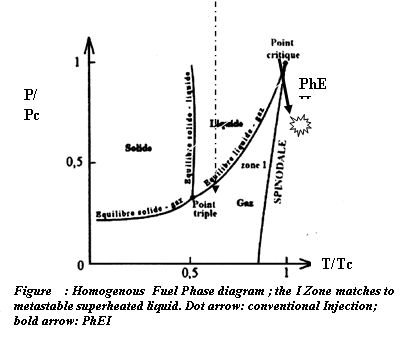 The poor performance of today's thermic engines is due to the temperature inhomogeneity of the hot air. With today fuel injection, it’s difficult to obtain a uniform and stoichiometric air/fuel mixture in the combustion chamber, in the extremely short deadlines (the order of ms), while the volume ratio air/vaporized fuel volume is in the order of 100. In these motors, the temperature profile is a paraboloid of revolution ( Fig 1); the air temperature is at its maximum, near the point of injection; then because of jet dispersion, it decreases stepwise from 1300 ° C to 170 ° C. But ideally, the temperature should be uniform at 1000 ° C. Calculating (cold source at 85 ° C) the thermodynamic average output, we find 36% in today injection and 72% in ideal injection. Double! The Phase Explosion (PhE) which is a dramatic increase in nucleation frequency portrays the catastrophic change of any metastable liquid to vapour.

Using nanosecond lasers, the metal surface temperature rises sharply, to be close to the critical temperature (T = 0.8-0.9 Tc), leading to a direct sublimation of surface layer, with a PhE explosive of steam and fine droplets. The liquefaction step is skipped. Near the Critical Temperature occurs homogeneous nucleation. Once the bubbles have reached a critical radius, they explode in a mixture of steam and droplets. Using a Marx electric machine, 500 J of electrical energy are brutally discharged in a metallic hollow ellipsoid submerged in water, as shown in Fig 2. During the electric shock, the huge power does not form a huge single steam bubble, but a PhE cloud of tinies bubbles, which ultimately explodes violently. The PhE Fuel Injection (PhEI) is taking benefit of the stored built energy in a liquid undergoing PhE.

In the diagram Pressure/ temperature (Fig.3), the way the fuel is currently injected is shown with the dot arrow. It starts with a high pressure which compresses the liquid according to the Hugoniot law; but drops or trickles still remain liquid. Difficult for them to full the entire flat combustion room! The PhEI is in favour to increase the fuel temperature, before injection in the engine, near the top of the Fuel Critical Point. From this point, the injected fuel looses its pressure and cross the Spinodal Line, (Fig 3, bold arrow) making drops to explode naturally (because on the right side of the Spinodal line is the homogenous nucleation), on the entire combustion chamber volume. This much better mixture will burn instantly increasing uniformly the air temperature, and motor efficiency (> 50). PhEI results in improving the motors actual output and bringing it closer to its theoretical value, with the following obvious advantages: drop in fuel consumption, pollution and unburnt, better torque, reduction of cylinders dimension with less motor weight and volume.