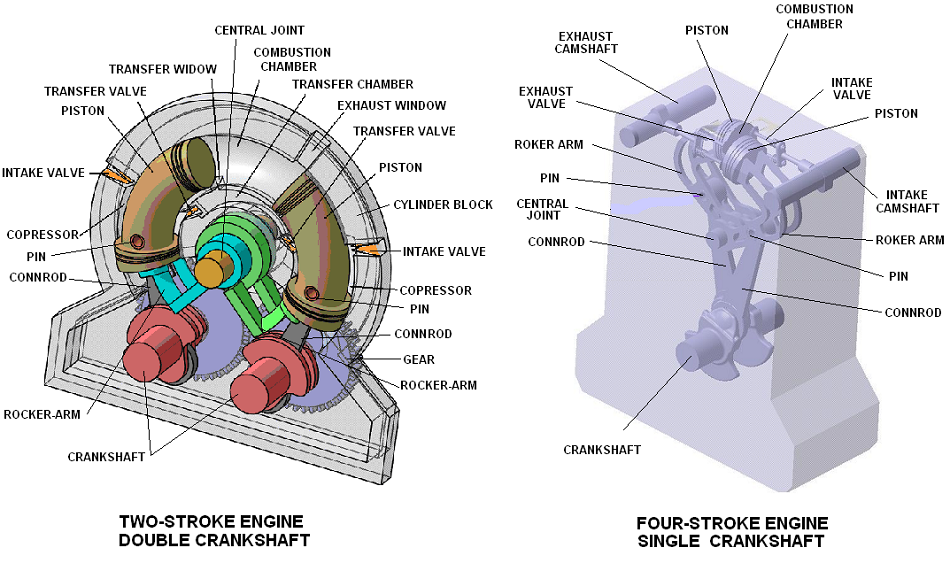 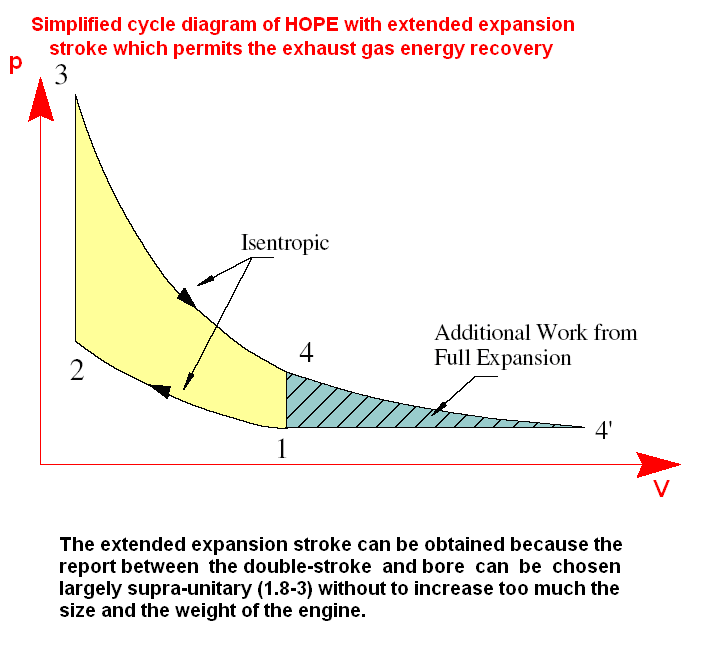 "Hybrid Opposite Piston Engine — HOPE attempts to correct certain deficiencies of the thermodynamic cycle and of the mechanism as employed in conventional engine: The cylinder head presents big heat losses and has a complex construction; A lot of exhaust gases energy is lost doe to relatively short stroke; The side force on the piston (pushed by the connecting rod) increases the friction and the wear of the engine; Is difficult to be balanced.

The inconveniences and disadvantages of the conventional engine are overcome by HOPE concept which uses a toroidal opposed-piston configuration, including two stepped piston compressors for each cylinder integrated in the volume of the engine. The compressors are
very simple and cheap and are not additional to the engine. The pistons work suspended in the cylinder using a central joint and will be a very low friction with the cylinder. The extended expansion stroke can be achieved without to increase two much the size of the
engine. A four-stroke HOPE configuration is also proposed without exotic or unverified solutions for the valve mechanism. HOPE uses a connecting rod-crankshaft mechanism to transform the oscillating motion of the pistons in rotating motion.

Why this engine can be considered? hybrid?? The answer is: because can achieve by itself the exhaust gas recovery.

Benefits
-It is very well adapted for the new fuels as hydrogen, CNG, LPG and biofuels;
-When the hydrogen is employed as fuel, the efficiency of this engine can surpass the fuel cell efficiency;
-Fully balanced mechanism and very good NVH behavior even with two pistons or four-stroke configuration;
-Having the compressors included in the volume of the engine it offers extreme power density of around 2.5 kW/kg;
-Because is no cylinder head, the heat losses are diminished and the effective efficiency increase a lot, being around 50%;
-The piston works without touching the cylinder and that diminishes the friction with around 20% ;
-Easy to change the compression ratio (VCR) in the configuration with two crankshafts;
-Using extended expansion stroke can improve also the efficiency;

Applications
This concept can be used for all means of transport as well as for efficient stationary power units.

Manufacturing
There are not special problems to manufacture this engine with the current technologies.

Costs
One cylinder HOPE with two pistons can replace a three or four cylinders conventional engine (in the range of 30-130 kW).  Also the cylinder head is missing. That reduces drastically the production cost and makes this solution attractive for engine manufacturers."