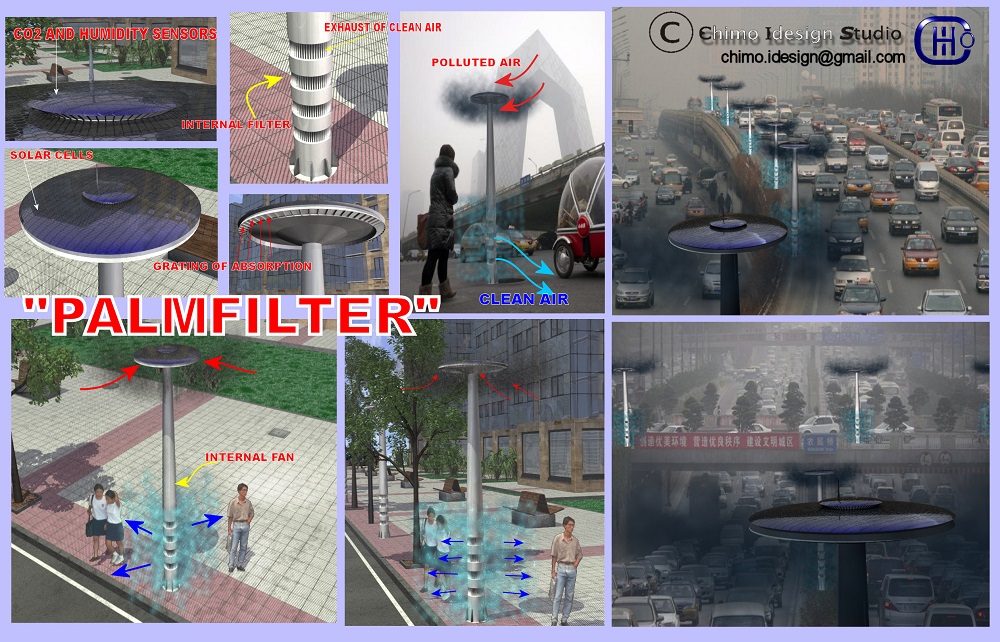 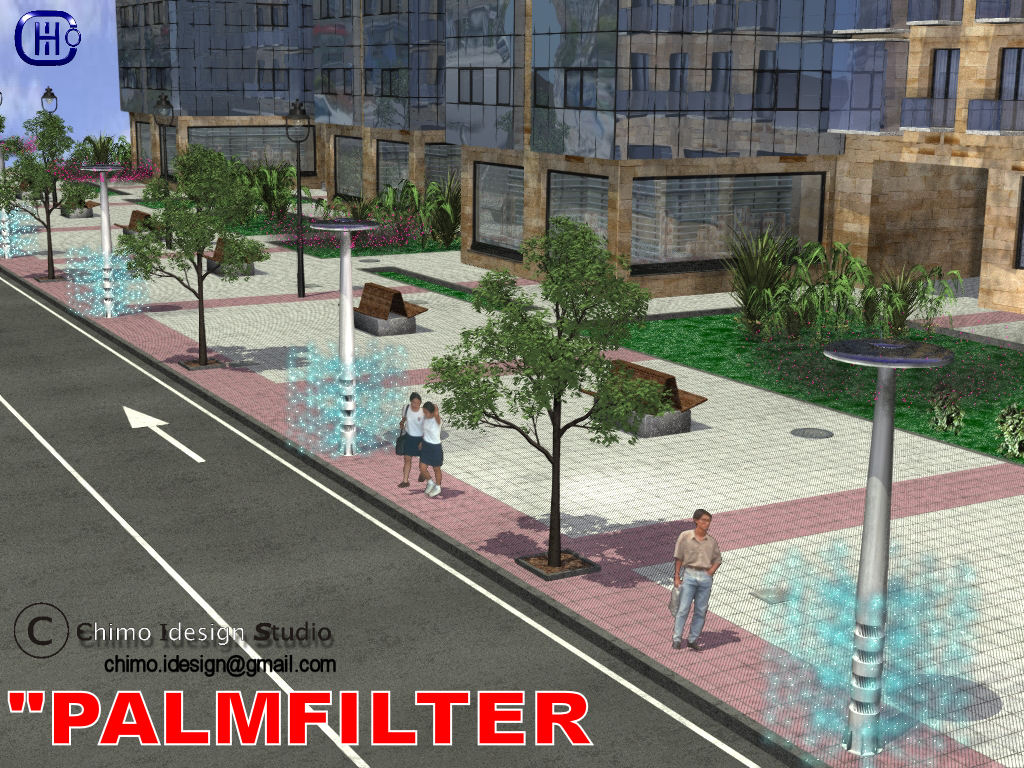 Current problem to solve:
In the current situation of growth of CO2 emissions to the atmosphere, and other pollutants NOX, due to the combustion of fossil fuels for transport such as cars using the environment in cities can become unbearable, causing respiratory problems for the population, which sometimes must wear anti-pollution masks because particles suspended in the air. This is a problem that should be more focused on the source of it, which put remedies to its effects. The problem of deforestation and the growth of cities fouls the air, which is not renewed and community life difficult. My proposal is not a permanent solution, but if this could benefit by reducing some harmful particles in the air we breathe.

Benefits:
The potential benefits it can bring to community life in the cities is a renewal of pollution-laden air, whether caused by exhaust pipes, smoke fire, etc. Particle contaminated air would be absorbed by a propeller at the top of the filtration tower "PALMFILTER" which would suction through a grid and sent to the filter, downstream, retaining the particles in suspension and emitting a clean air . Mechanics would collect the contaminated air in the upper layers and send clean to ground level, since the tower is 4 meters high.
Improvement over existing filters.

In this field there have been many attempts to do this kind of filters by multiple ways, so that in fact is what is intended to be a standalone filter, ie its power is generated by solar energy captured by the solar panels lining the upper umbrella filter and could be stored in a battery for supplying a cylindrical fan motor installed inside the main pole.

Function and design work
"PALMFILTER" consists of a hemispherical head coated flat solar panels that capture the energy of the sun, so it would be disconnected from the mains. On top of this solar cell umbrella install a cap or cap containing the necessary sensors for humidity, light, particles, etc., which would trigger or snuff out the filter. That is, is loaded with photovoltaic energy, air quality analyzes and plugs if air analysis parameters are at levels hazardous to health. So is operated autonomously and begins to filter the air, pulling air in the superios and releasing it in the bottom of the post for this search.

I should not be running all the time. During the day is charged by energy from the sun, and the only thing is it would have to be maintained from time to time to change or clean the filters after a life time. Post body be made of metal, steel resistant base anchored to the ground by screws. It can be located especially in areas of high traffic of vehicles or in streets where people and vehicles coexist.
In short, "PALMFILTER" "is an attempt to solve the problem of pollution in the cities, especially big cities so that it is in the most economic and sustainable way, since no energy consume electricity grid.