A Geometrically Improved LED Replacemet Bulb with a Modified Edison Base 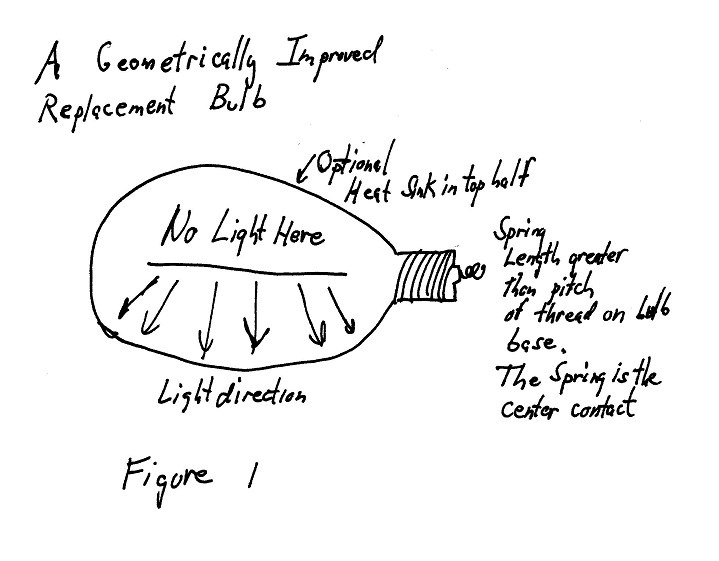 An ordinary Edison base LED replacement bulb emulates an incandescent lamp in that it provides omnidirectional light. These are used in table lamps, desk lamps and ceiling fixtures. Purpose made LED lighting, such as strip lamps, provide light over a much smaller solid angle where the light is actually needed. This increases their system efficiency over that of LED replacement bulbs even though the LEDs themselves and their power supplies have approximately the same efficiency as those used in replacement bulbs. The reason that LED replacement bulbs with Edison bases cannot provide just light in the down direction, say is that their rotation is dependent on the details of the socket depth. (We are talking about ordinary bulbs, not floodlights.) In desk lamps and ceiling fixtures it would be highly advantageous if the horizontally installed bulbs typically used in the aimed their light downward. This would improve system efficiency by typically more than 30% for these systems simply because a larger percentage of light goes to useful places rather than being lost within the fixture or lighting the ceiling.

The new type of replacement bulb would have LEDs that are typically arranged in a plane. They would use high power LEDs that typically put out light over about a 120 degree angle (measured to the half power point). The bulb needs a modified Edison base that has a spring material center contact, as shown in figure 1. This allows electrical contact of the bulb at any desired rotation angle. The exact form of the spring might be helical, as shown, or might just be a folded flat metal piece.

Besides the geometric advantage of just lighting the desired area there are other opportunities provided by the design to improve both the efficiency and lifetime of such bulbs. Because the bulbs use less power to provide adequate lighting they run cooler than regular replacement LED bulbs which increases both their light output and their expected life. It can be made to run much cooler if the portion of the bulb that no longer emits light were converted to a heat sink. Decreasing the operating temperature by 50C will increase the light output by about five percent and approximately double the life.