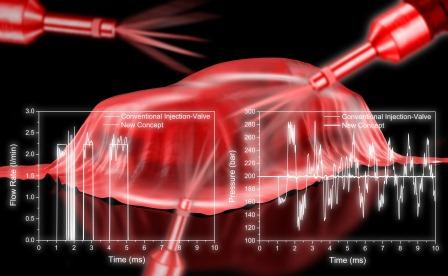 Gasoline engines with separately operating injectors, for the direct injection of fuel in each cylinder, represent the present state-of-the-art. The injectors used gasoline engines operate at pressure of up to 200 bar in order to provide fuel sprays with very fine droplet distributions with Sauter diameters of about 20 ?m, generated by round hole nozzles.

Using multiple fuel injections, combustion methods with direct injection can be realized, which would not be feasible with the intake-manifold fuel injection of conventional gasoline engines. Stratified and homogeneous combustion methods can be realized, but investigations show that further improvements of combustion methods and thus improvements of exhaust emissions are only possible when the pressure pulsations, caused by opening and closing, the injector valves can be inhibited. The latter are inherently related to the required fast opening and closing of the valves and can reach ±30 % of the mean operating pressure of an injector.

Furthermore, not only the injection of a considered injector causes pressure pulsations in front of this injector but in addition, the injections of the other injectors of an gasoline engine cause induced pressure variations. Pressure pulsations, which are caused by one of the injectors, run from this injector into the common rail and from there through the connecting pipes to the other injectors. This dependency between the injectors can only be eliminated if the pressure waves caused by the considered injector are significantly damped. The development of improved combustion methods in gasoline engines can lead to reduced emissions. The achievable improvements depend on whether the pressure pulsations, occurring in common rail injector systems, can be damped in a way that controlled fuel injections become possible.