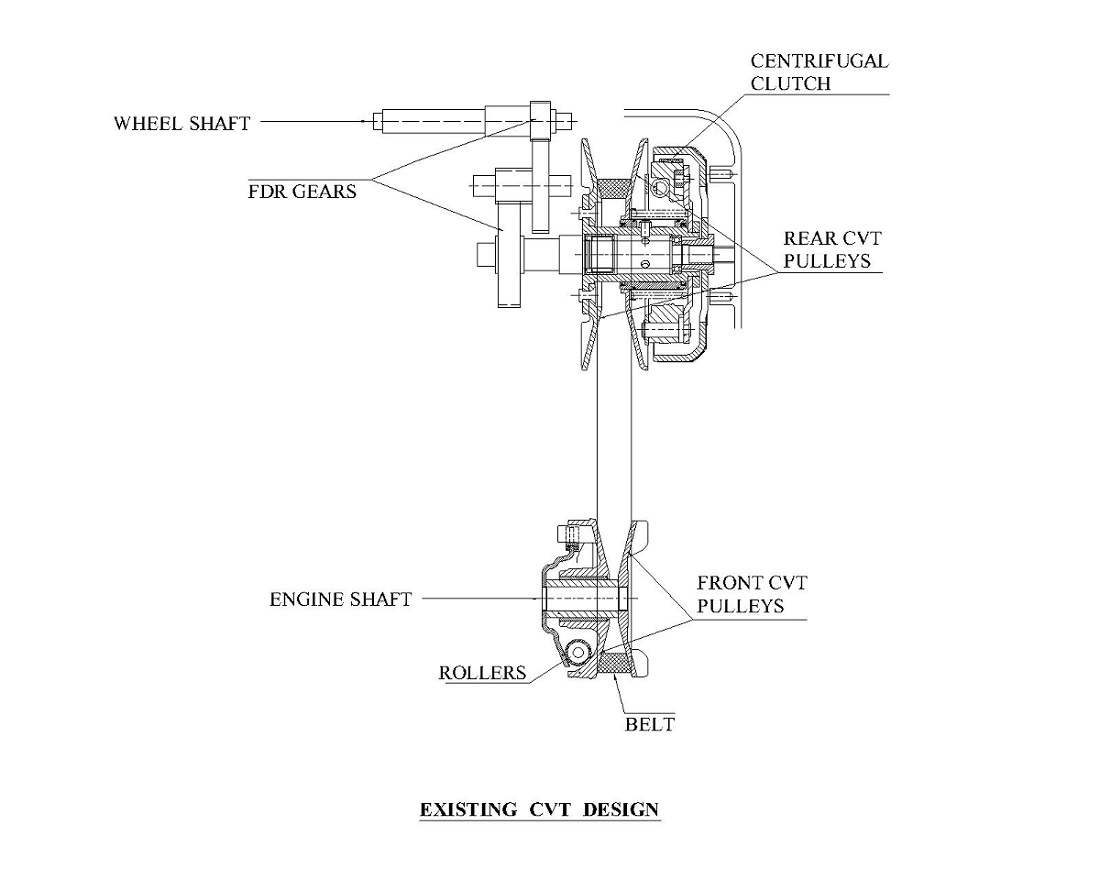 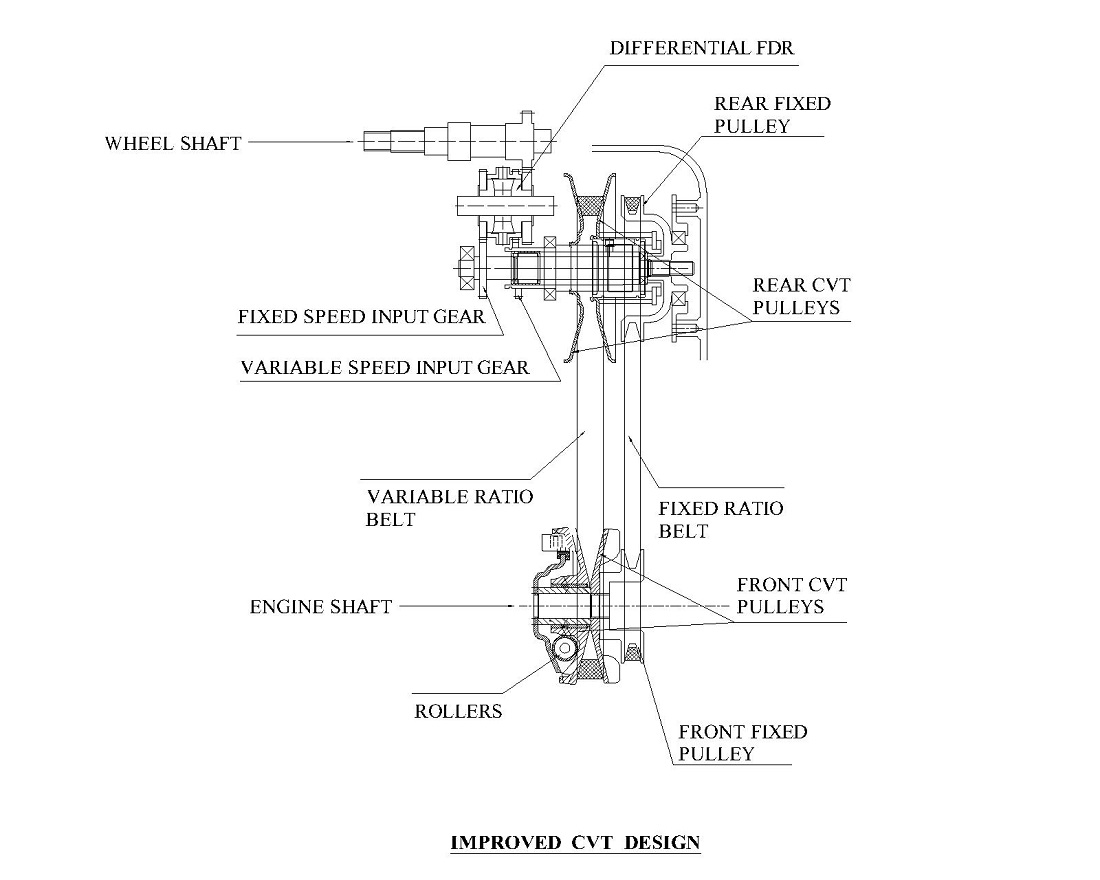 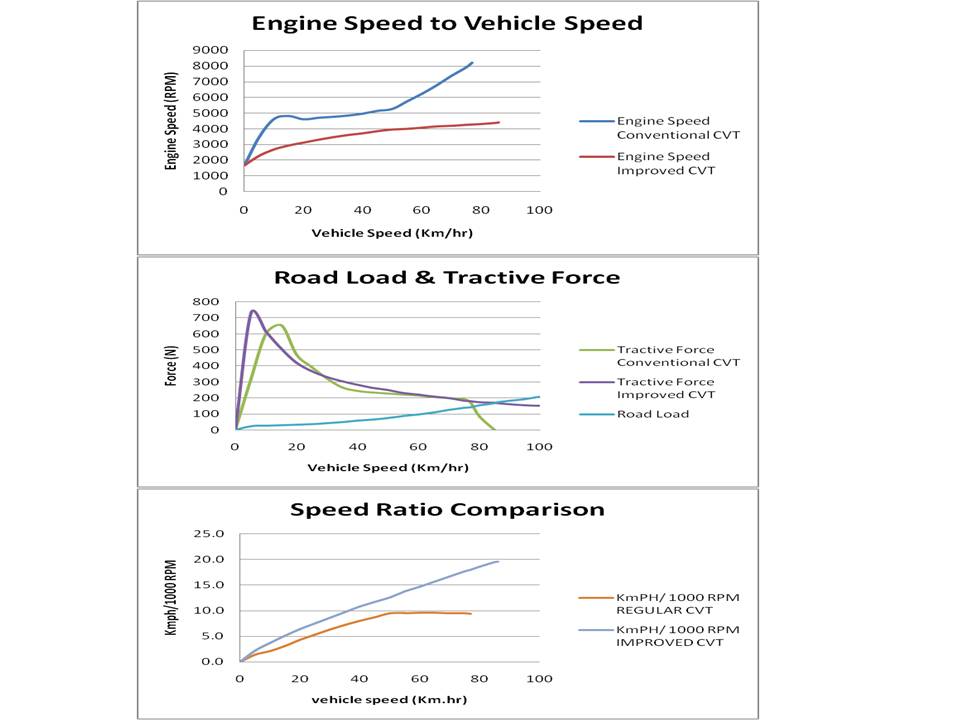 The fuel efficiency of CVT (Continuously Variable Transmission) driven scooters is very poor (60% of geared bikes of same CC) in city driving conditions mainly due to higher engine operating speeds, slippage in centrifugal clutch and power lost in transient phase plus CVT efficiency. Still these scooters are popular due to ease of driving. illustration 1 describes the existing CVT transmission layout. The major components are Front and Rear Variator Pulleys, Centrifugal Clutch and Final reduction drive (FDR). The suggested design will improve the Fuel efficiency > 40% as seen on actual prototype. The emissions also will be reduced by similar proportions.

The modified design of CVT is shown in illustration 2. It mainly comprises Front & Rear Variator pulleys, Front and Rear fixed ratio pulleys, two concentric input shafts to FDR. The FDR with a differential mechanism receives the two Input speeds. Output Speed and Torque is as per the difference in two Input speeds. The difference in two Input speeds is adjusted by the variator pulleys in line with conventional design by use of centrifugal force of Rollers and Torque feedback of helical cam in Rear variator. Centrifugal clutch is eliminated as differential mechanism can reach “Geared Neutral” condition at specific speeds of two input shafts at Idle engine speed. As rider gives throttle, the engine speed increases and centrifugal rollers shift the variator ratio and variable input speed to differential. Thus vehicle takes off. The optimization of roller weights and cam is required to match the Specific Fuel Consumption (SFC) curve of every engine.

The performance curves of existing and improved designs are shown in illustration 3. The engine speed is reduced in total range of vehicle speed (Graph 1). This is due to higher overdrive achieved by differential gears such that, at 8 Kmph higher top vehicle speed, the engine runs at Maximum torque point where SFC is best. The Maximum tractive effort is increased by 15 % and at lower vehicle speed leading to increased acceleration of vehicle (0-60 Kmph is reached 1.2 sec early). In conventional CVT Vehicle top speed is limited by steeply dropping power curve beyond rated speed and tractive force balance with road load. With improved CVT, it is limited at balance of the Maximum tractive force at peak torque point and road load. This also indicates the potential engine down sizing possibility adding to reduction in overall cost, emission and fuel consumption. The third graph compares the vehicle speed and Kmph/1000 engine RPM. With improved CVT this factor is continuously increasing up to 19.6 till top speed as compared to 9.85 with conventional CVT indicates the reduction in engine speed achieved for higher vehicle top speed. This design is applicable to all the CVT driven scooters and bikes.

The manufacturing process is all conventional and proven. The cost impact of this design change is maximum USD 10. If engine down sizing is done, the overall cost will be reduced substantially