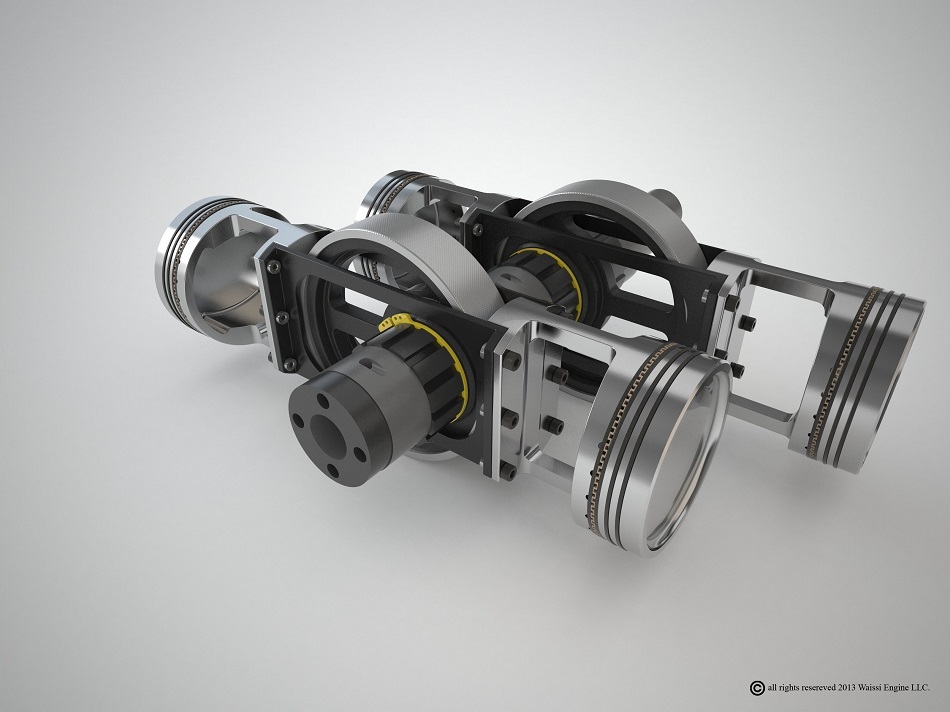 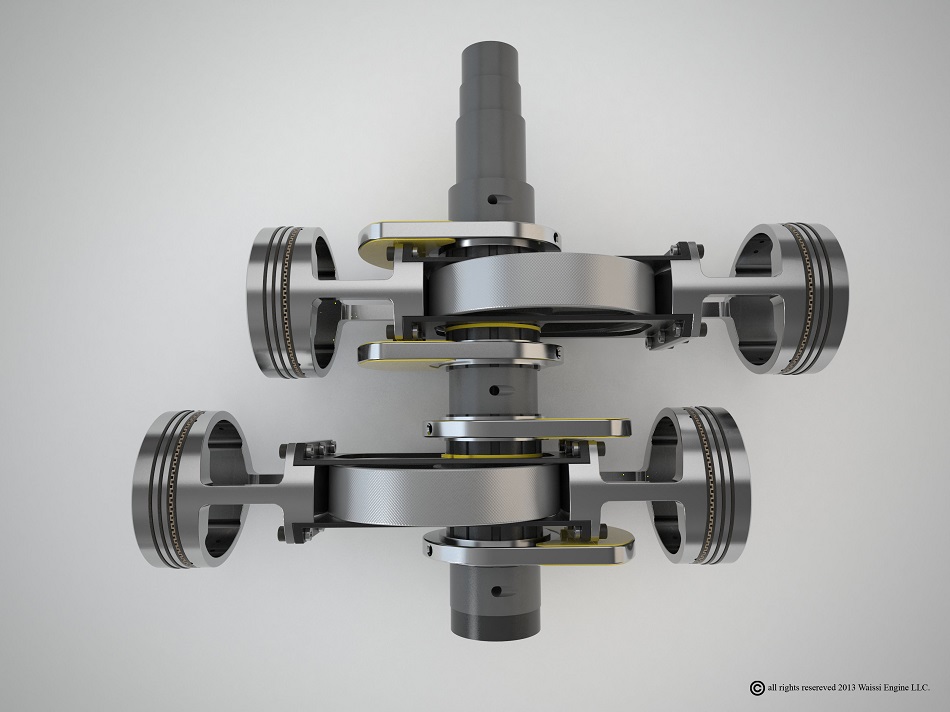 * The WAISSI ENGINE has the simplest possible opposed cylinder, opposed piston design. The design employs an integrated piston, driveshaft, crankdisk, and a bearing ring for each cylinder pair. There is not traditional crankshaft and no connecting rods.
* The engine offers simple dynamic balancing because of no secondary (conrod) forces.
* The inertial acceleration and force simulations show for the WAISSI ENGINE (no conrods) that the engine inertia reaches optimal, perfectly sinusoidal, curves for piston speed, acceleration and piston force, which no engine with conrods can achieve. The F-1 engine design with a high conrod to stroke ratio (about 2.565) comes closest but cannot reach this optimal curve.
* In a regular engine when the piston moves after TDC the volumetric expansion of the space above the piston head occurs faster because the conrod big end travels first out and then back in. In the WAISSI ENGINE the volumetric expansion curve is “flatter”, because of the geometry. This slower volumetric expansion above the piston head of the WAISSI ENGINE is a significant advantage, because the peak pressure occurs between 11 and 22 degrees during the work stroke. Smaller space, ignition and explosion, larger piston thrust, higher torque.
* The WAISSI Engine has fewer friction surfaces than a conventional engine.
* The piston to cylinder side wall forces are estimated to be about 40% lower, because the WAISSI Engine has an integrated piston structure, and no connecting rods.
* Cumulatively, the internal engine friction is estimated to be 40% lower than that of a comparable size conventional IC engine.
* The WAISSI ENGINE has fewer internal engine components and parts; fewer moving parts.
For example: A conventional 4-cylinder engine has a crankshaft, four connecting rods, and four pistons, or nine major moving components. In the WAISSI Engine these components are replaced by a straight shaft with two off-set crankdisks installed on the shaft, two bearing rings, and two integrated pistons, or five moving components. The shaft-crankdisk combination forms an integrated unit, and rotates as one unit, and each cylinder pair has an integrated piston pair moving as one unit respectively.
* Lower manufacturing and assembly costs because of fewer engine parts and components.