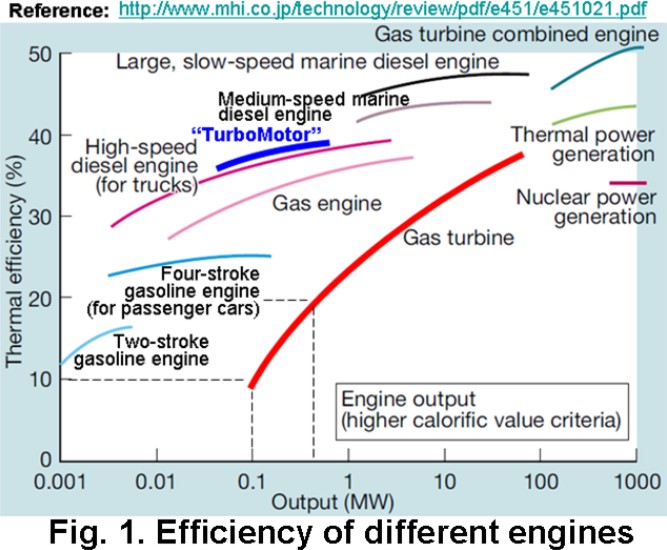 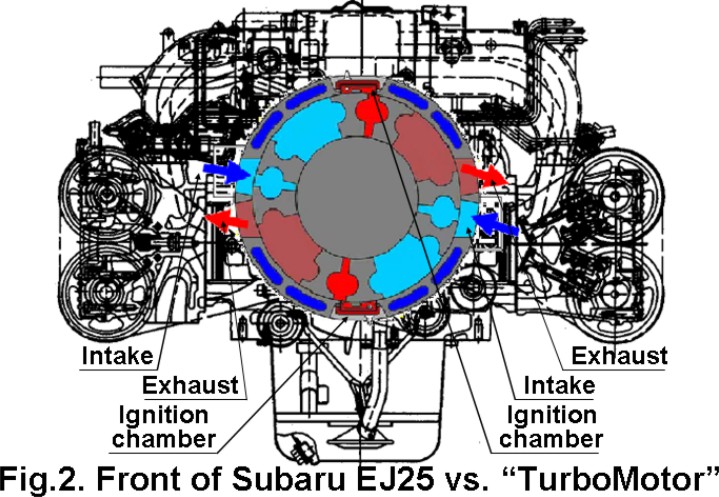 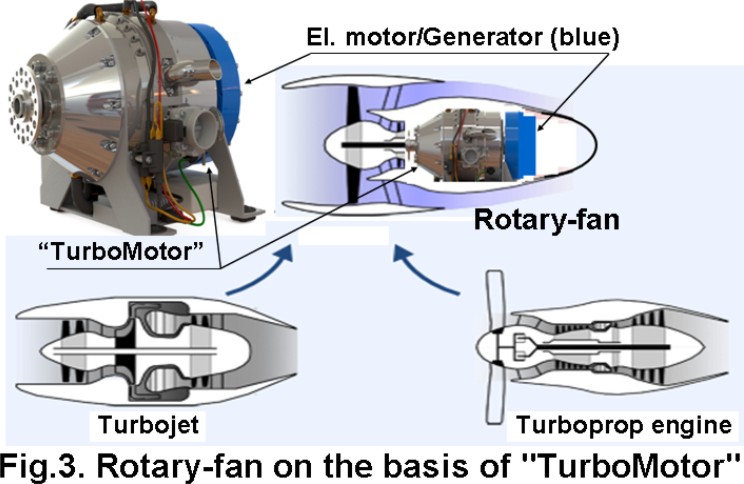 PROBLEM: Freedom of movement characterizes the essential quality of human life. However, we are limited in movement: our cars are attached to roads and bridges, airplanes attached to the airfields and light helicopters with ski gear cannot move on the ground. The first "flying cars" Terrafugia Transition with piston engines are already. However multi-cylinder engines are too heavy and weak for short/vertical take-off and landing.

Powerful gas-turbine engines (GTE) are the pinnacle of modern technology, but their low-power analogues (>300 kW) have a very poor efficiency at the level of a steam locomotive (see Fig.1, red-curve)! Therefore they are of little use for GA.

INNOVATION. Idea of "optimal" engine is: to combine in one structure the positive qualities of ALL existing engines and eliminate their disadvantages. This idea is entirely implemented at Rotary-Hybrid Technology "TurboMotor" (see US Patent # 8,210,151 B2 and Int.Publication WO 2011/010978 A1). Animation of "TurboMotor" operation principle can be viewed online at: http://www.youtube.com/watch?v=1prL84AOXTw&feature=youtu.be

A) The design of "TurboMotor" kinematic mechanism implements the principle of minimal movement in the friction pairs and fuel ignition from flame torch from outer ignition chambers with big peak pressure in compact combustion chambers. All taken together provides efficiency at the level of diesels (see Fig.1, blue-curve) and specific power at the level of GTE at very compact dimensions (Fig.2).

B) Turbofan propulsion systems are created now only on the basis expensive gas-turbine engines. This held back development of GA. The emergence of effective "TurboMotors" allow us to create a new type of high-performance propulsion for GA (Fig.3), which does not have such disadvantages as dangerous and very noisy jet stream. In addition, the fan with outdoor shroud is much safer and silent for the environment vs. the propeller which has a much larger diameter.

C) Moreover, it is possible to create a hybrid power unit consisting of "TurboMotor" and a reversible electric machine "El.Motor/Generator," which are combined into integral coaxial unit. The availability in a single power unit of two engines, which may operate in parallel, greatly increases the reliability of such propulsion. Consequently, this greatly improves flight safety.

Manufacturability. All parts of housing and “TurboMotor” kinematics can be fabricated only by a single modern numerically controlled machine tool.

Marketability. “TurboMotor” has multi-fold advantage at all technical and economic indicators vs. reciprocators and GTE in power range from 40 to 800 hp. This provides to it monopoly position in engine’s market for GA and industrial application.

Cost-effectiveness. “TurboMotor” have no necessity of high pressure fuel equipment and synchronization of ignition. “TurboMotor” kinematic mechanism has only 7 parts. Therefore the cost of “TurboMotor” manufacturing has become in 2 ÷ 2.5 times vs. piston engines with the same power. Therefore, the profits of “TurboMotor” production will be over 100% per one engine if it intend for usual plane or helicopter.
But GTE are 3÷5 times costly vs. reciprocators. Therefore income from rotary-fans with “TurboMotors” may be about 10 times more.