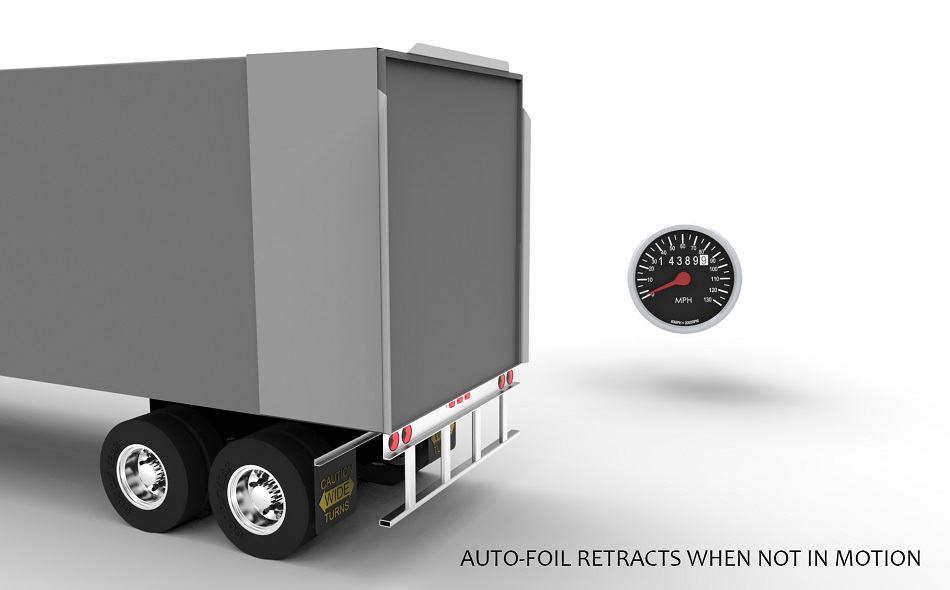 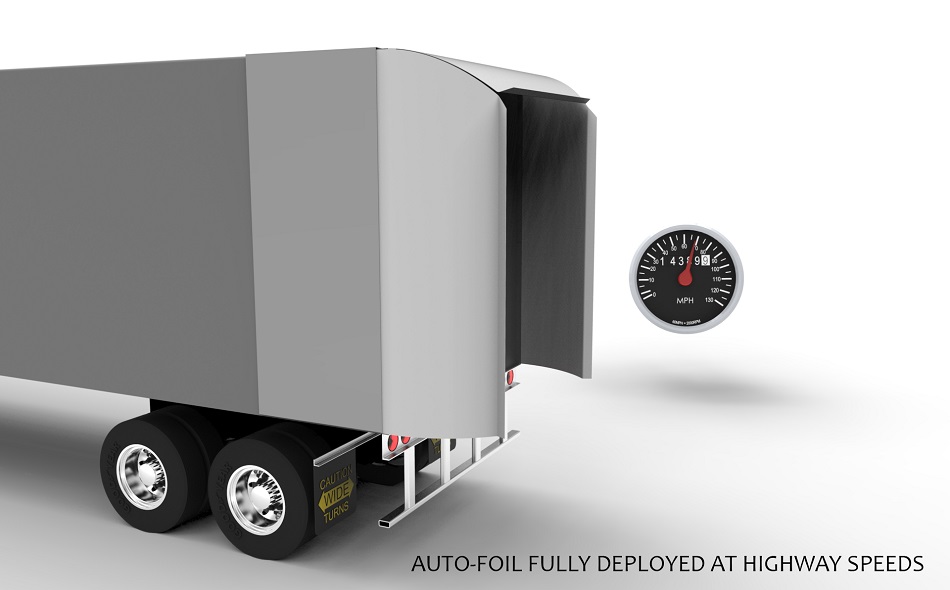 The use of aerodynamic devices on semi-trailers, specifically devices located at the rear of the trailer, has been proven to reduce drag and improve fuel efficiency by up to 6%. The addition of such devices help to transition the air that sweeps across the trailer’s top and sides toward the end of the unit, and would otherwise begin to swirl around and create large, standing vortices that increase drag. Current devices require the driver to manually actuate the devices adding time and complexity which is why they have not been accepted in the marketplace. The Kaber-Tail is an aerodynamic device that is automatically extended when the vehicle is at highway speeds. The Kaber-Tail is equipped with a sleeve that houses a fiber reinforced thermoplastic sheet in which a molded fin is incorporated. This fin, which is located at the outermost edge of the sheet, will cause drag on the sheet at highway speeds forcing the sheet out of the sleeve. The sheet is mechanically connected to a tension spring. This tension spring is calibrated to allow the sheet to be retracted when the drag on the sheet’s molded fin is less than the predetermined drag value on the molded fin when the vehicle is at a specified speed.

The fiber reinforced thermoplastic sheet is material already used in commercial trucking applications. The FRP is purchased in flat stock dimensions, machined to the proper trailer height and width and finally thermoformed to the desired curve. The sheet’s reinforcement, laminate configuration and thickness allow it to be flexed flat when retracted in the trailer’s sleeve housing but will also hold its thermoformed, curved shape when extended at highway speeds. The molded fin’s primary function is to deploy the Kaber-Tail, its secondary function is to provide stiffness along the long edge of the curved sheet to eliminate any potential movement during operation allowing the curved shape to remain smooth and rigid, further decreasing the drag.

Kaber-Tails primary market will be owners and operators of existing fleets. Kaber-Tails are designed to be installed on all styles of standard trailers, custom trailers and can also be incorporated into new trailer designs such that the molded sheet with the fin is encapsulated within the trailer’s housing. The size of each sleeve and each sheet is customized to the geometry of the trailer.

As tougher emissions and fuel-economy standards approach the Kaber-Tail is a low-cost, low-risk and fully automated form of improved fuel efficiency and great way to reduce CO2 emissions. Using EPA accepted fuel consumption data, a Kaber-Tail equipped trailer traveling 60,000 miles in one year will cut CO2 emissions by 5.1 tons. If adopted by one large fleet of trucks the result would be a reduction of 15,000 tons of CO2 per year! Using the same estimated miles traveled would result in a fuel savings of $1,600 per year and a 2 year payback.