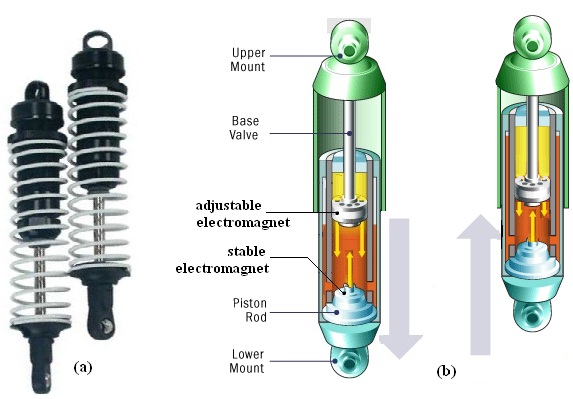 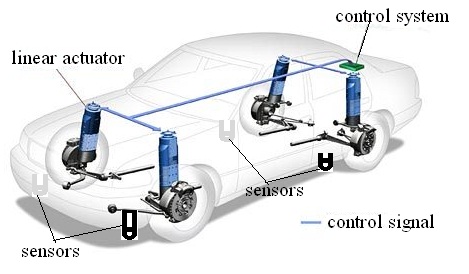 Are you fed up with bumps and jerks on the road while travelling in a car?Here is a possible way to control and reduce it effectively.This type of active electromagnetic suspension system promises a smoother ride than the conventional passive suspension system.

This concept discusses the working of dynamically controlled active suspension system based upon the principle of repulsion of two electromagnets as in Fig. 1.

The electromagnetic actuator consists of two electromagnets placed with like poles facing each other.Hence by varying the supply given to these magnets the net effective gap between he magnets is varied.

To sense the road condition at every instant EOPD Sensor(Electro-Optical proximity Detector) is placed in front of each wheel as shown in in fig 3. these sensors measure the road distance from car base.Hence when a bump or hump is detected by the sensor, the controller changes the supply given to the electromagnetic actuator.So this movement of the actuator compensates the irregularities in the road and the passenger inside the car will never feel the jerks.

The functioning of the control unit in this kind of active suspension system is depicted in the above block diagram in figure 2. The control unit may be a programmable micro controller or a microprocessor. Some modern cars nowadays come with ECU (Electronic control Unit) which can also be used for suspension control. Hence a separate control unit will not be required.
The controller also decides the time when the corrective signal has to reach the electromagnetic actuator. So it delays the signal by a time (t) = Span/Speed.
Where, Span=distance between the sensor and the wheel
Speed =average speed of the vehicle

ADVANTAGES:
• more comfortable ride.
• more sensitive when compared to other active suspension system like hydraulic suspension.
• No separate control system is required. The existing ECU in the car can be used for this purpose.
• Variable ground clearance based on the speed.
• Increases the efficiency of the vehicle
• It can be used in hybrid cars so that it can adopt itself according to road conditions. Hence hybrid cars can be used in Indian road and also in highways by adjusting its ground clearance automatically.