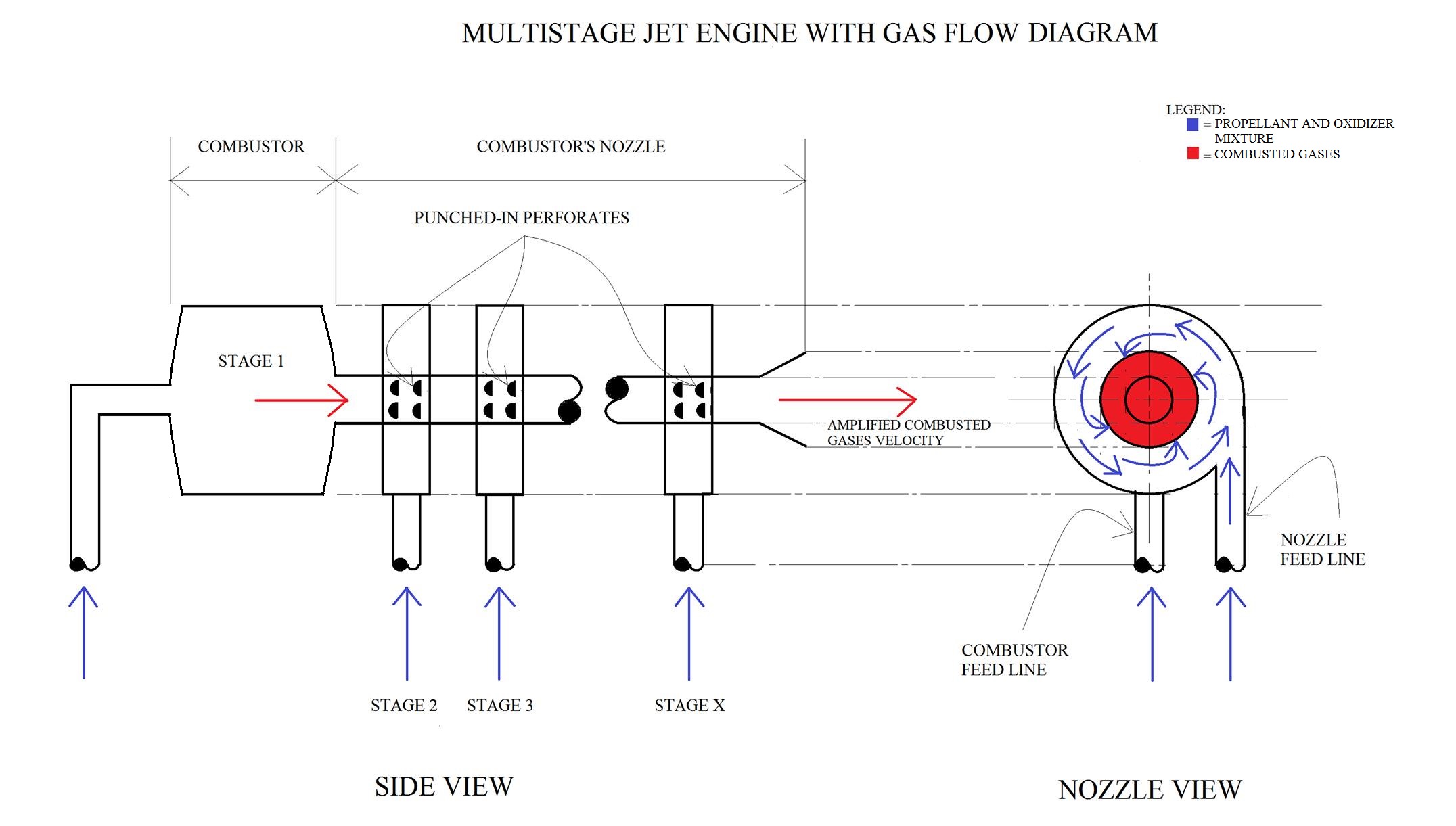 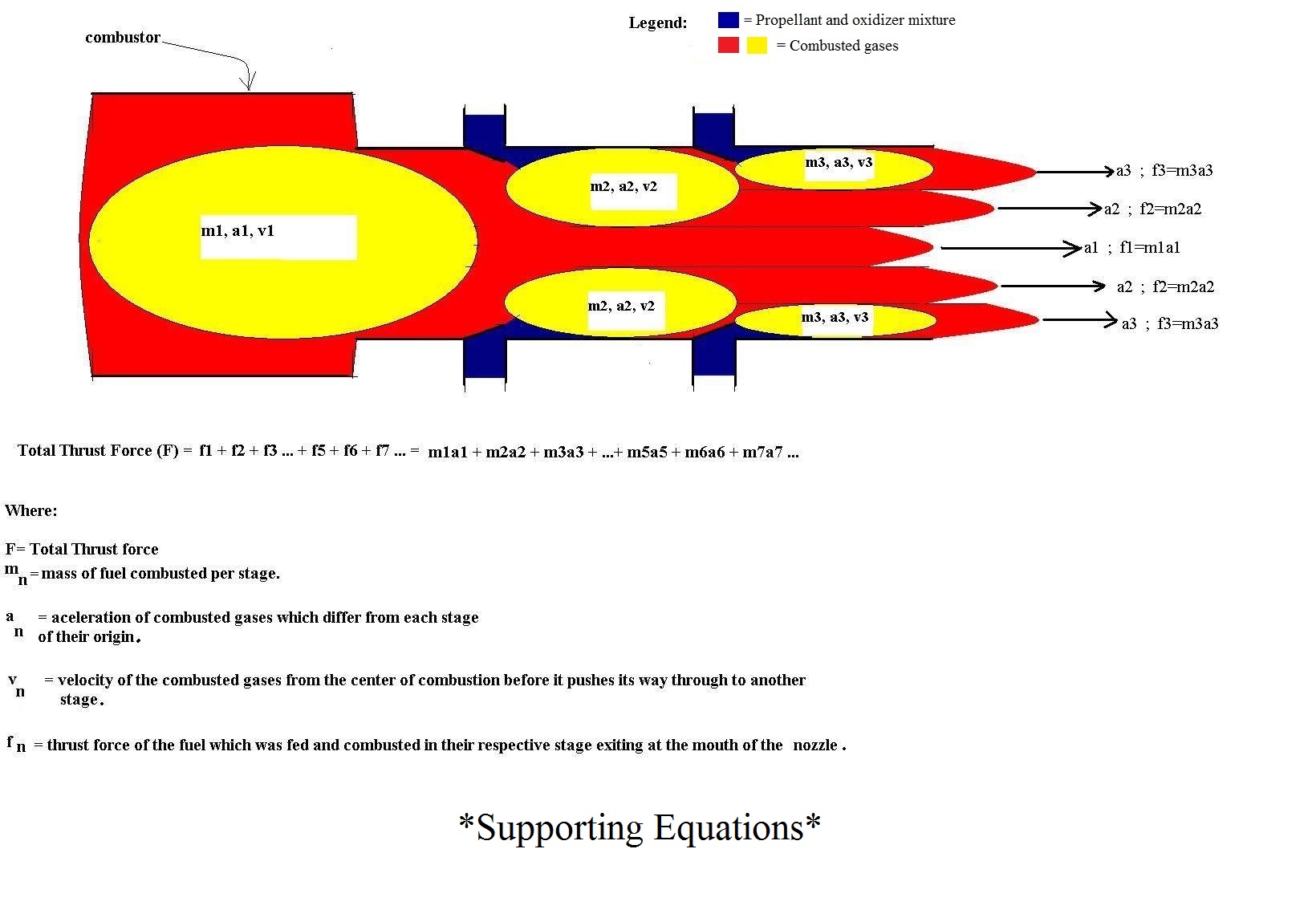 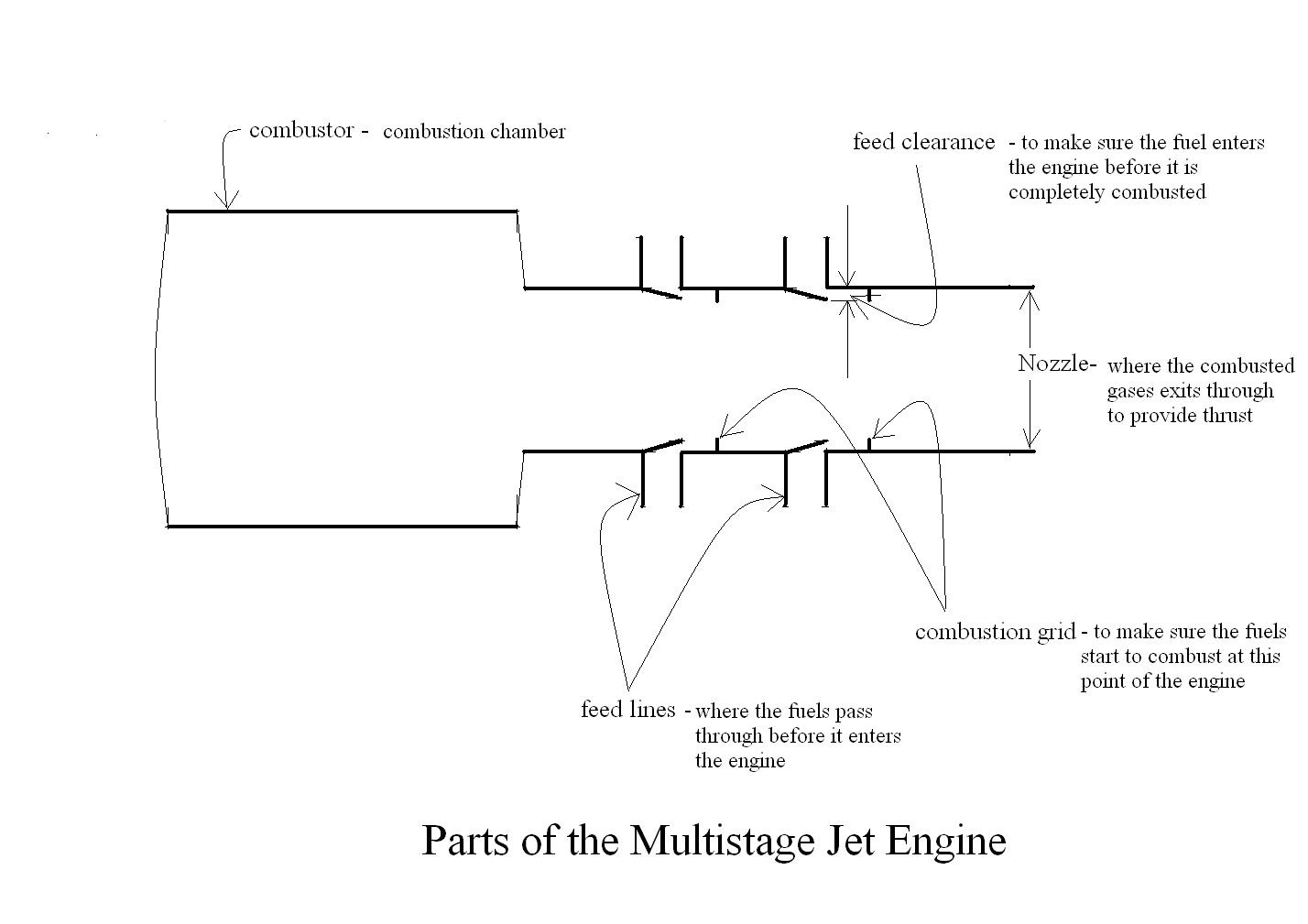 The proposed concept is a jet engine harnessing the advantages and amplifying characteristic of two or more linear combustions taking place inside the engine all together at the same time. The engine is composed of a combustor as usual, and a nozzle with an extended length to provide space for additional fuel feeders or injectors and at the same time confine two or more combustions inside the engine. Each combustion represents one stage each, which will take place inside the engine all together at the same time so that the velocities of combusted gases are amplified by providing the combusted gases an initial velocity equal to the velocity of the combusted gases that are pushing their way through from the previous stage, thereby amplifying the velocity of combusted gases in a summing manner, thus, amplifying the thrust of the engine also. From “Newton’s second law of motion” “Force=(mass)(acceleration)” suggests that if the mass of an object is constant, the net force from an object is directly proportional to its acceleration, which means the greater the velocity of combusted gases that are exiting through the nozzle of jet engines, means the greater the thrust the jet engine can provide. This technique is very beneficial when applied as a means of propulsion for future aerospace space missions and various aeronautic applications ranging from launching very heavy loads, up to faster atmospheric and space travel where great amount of thrust is needed while depleting a considerably lesser amount of fuel.

The engine operates at a lower temperature in theory because the engine is so designed that the amount of fuel fed to the engine are divided into small equal parts, then combusted in the different parts of the engine, thereby allowing the heat from the combusted gases to dissipate more efficiently in a larger area compared to the conventional one. My calculations done with the concept suggest that an equivalent of 5 liters of liquid propellant and oxidizer mixture combusted instantly would push the combusted gases out of its nozzle with velocity reaching up to 275 km/sec in the last stage, that could provide an amazing total thrust up to 55,867.35 kg or 122,908.17 lbs, which is yet to be proven. But not only just that, compared to its conventional jet engine counterpart, my current calculations suggest that the thrust of the engine will be amplified 5.5 times greater in each ten stages added to the engine.

The multistage jet engine is designed to combust most of its fuels in its nozzle with an extended length which are more readily to exit out of the engine while operating at a lower temperature which is one factor to consider in amplifying the velocity of combusted gases at values cannot be achieved by conventional jet engines alone.