The Bumble Bee Approach to Flight 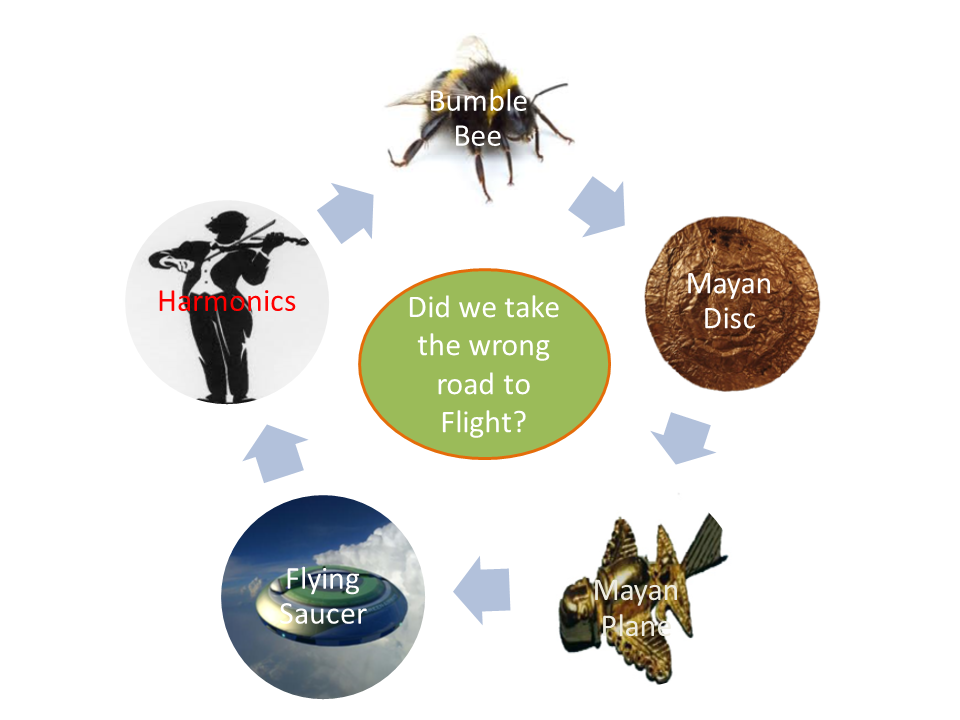 DID WE TAKE THE WRONG APPROACH TO FLIGHT?

Perception is Reality. Our current perception is that flight requires lift via the manipulation of air flow.

According to the laws of air resistance a BUMBLEBEE can (or should) not fly.

Our current perceptions do not allow this to make sense, however for any progress to be made we are begged to Challenge our Assumptions.

Therefore if we assume that a bumblebee should not be able to fly using its wings according to the laws of air resistance then one of them is wrong.

Questions we must ask ourselves to challenge the assumption are:

What is a Bumblebee's primary source of lift if not its wings?
What are its wings for?
Why is its body out of proportion with its wing size (as opposed to other flying insects)?
Can a bumblebee fly in a vacuum?
How does a bumblebee turn? It bumbles along unlike other bees.

An alternate theory is: A Bumblebee flies using Harmonics or Vibratory Sympathy

It alters the state of its body through its buzzing to resonate with the surroundings, thereby allowing it to float.

How do we corroborate this theory? The points below help connect this.

A: The ancient Mayans are believe to have used large Gold discs which they tapped and hummed to levitate up a flight of stairs. Additionally ancient Mayans made jewelry that were in the shape of planes, (though this somewhat counters the argument).

B: John Ernst Worrell Keely (September 3, 1837 – November 18, 1898) was witnessed as having the ability to turn a motor from 20 feet away using only his Violin. He was an inventor who claimed to have discovered a new motive power based on "vibratory sympathy". Keely announced that he had discovered a principle for power production based on the musical vibrations of tuning forks and that music could resonate with atoms or with the ether.

C: Almost all accounts of UFO's sightings mention rounded Discs that emitted a humming sound as they flew.

A new perception could form that we have likely taken a wrong approach to flight.

One way of determining if this theory holds water is to analyze the effect of a bumblebee's harmonics or buzzing sound with respect to flight.

Questions some of which you or NASA may have answers for:
Does it emit more sound than other flying insects?
Do different sized bees emit a different buzzing pitch and is this pitch proportional to its body size?
If the buzzing sound were cancelled using an opposing sound or sounds would the bee still maintain flight?
Can a bumblebee fly in a vacuum?
Until Finally - Do its wings create a buzzing sound that enables its body or air around it to resonate, thereby giving it lift?

I hope this theory if nothing else provides food for thought. We live in an age where very little questioning of reality is done - perhaps because we have been programmed to assume the truth.