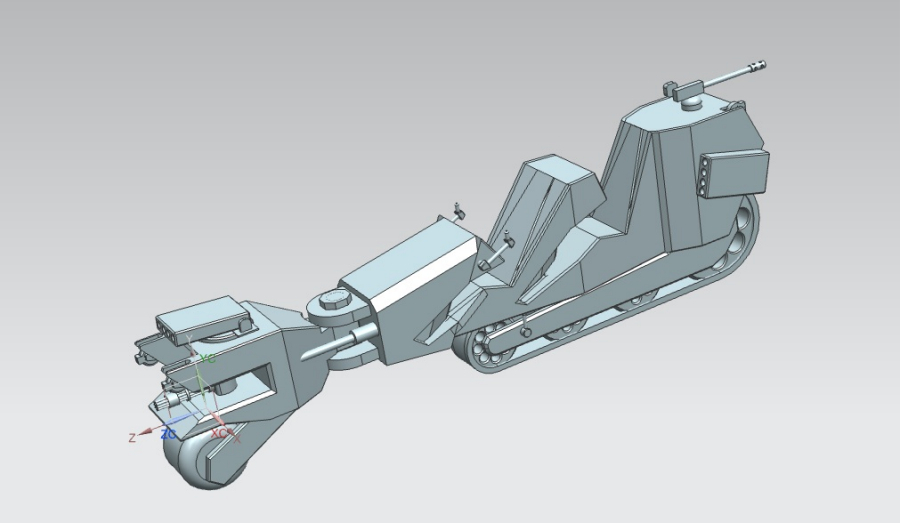 We hereby give you a defense vehicle which is equally powerful to a tank, but compact and stealthier than it. It will moreover look like a motor bike. We use mono caterpillar track to drive the vehicle, but the tracks are fit with rubber pads with strong grip threads in order to nullify the sound made by the tracks and to ensure its maneuverability on all types of land.

Initially we first planned to make the turret in a smaller size, but precise materials would fail even within a small impact. so we have to find an alternate solution. with deep analysis we planned to use a javelin in the place of turret. So four javelin launchers are kept in series within an enclosed block and a hydraulic arrangement is kept below this launchers in order to minimize the backing effect occurred while shooting. To make this vehicle even more defensive the same javelin turrets are added to the rear part of the vehicle. Then grenade launchers are also added to the vehicle, two at the front and two at the rear.

Even though the vehicle is loaded with strong missiles and grenades it should be provided with a gun and it should give the driver an easier access so inspiring the technology used in the Apache helicopters we provide a 270 degree rotatable Gatling gun which rotates according to the eye sight of the driver and the trigger is provided in the steering lever itself. So it gives an easier access. The rear part of the vehicle should also be defensive so a machine gun operated by a remote control is mounted at the rear and it is operated by the co driver. Now this vehicle is stealthier, strong and defensive.