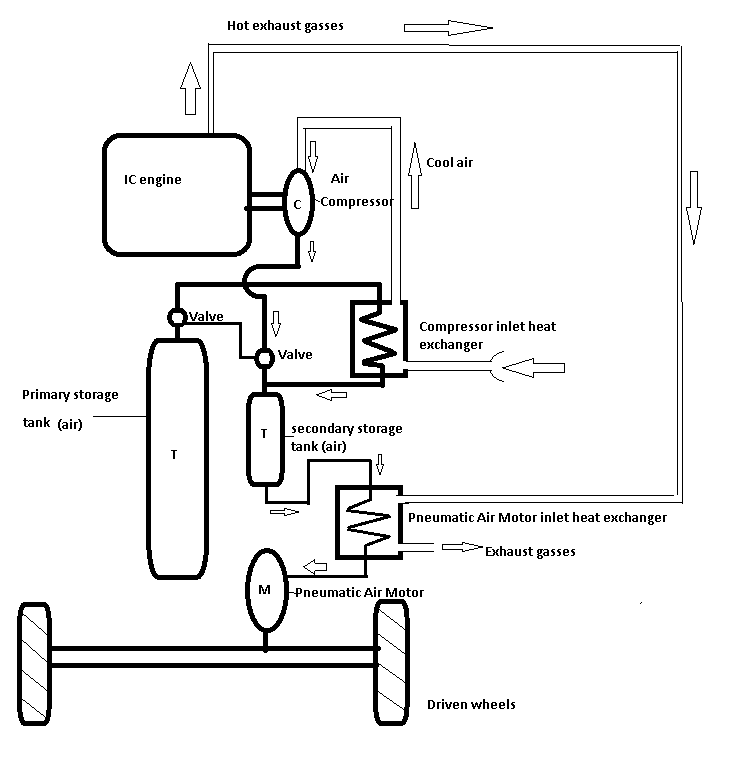 As shown in the figure, the main components of the system are an IC engine, an air compressor, a pneumatic air motor, two heat exchangers and two air storage tanks. For short journeys the vehicle can work only on pneumatic power stored in the tank which can be filled from any power source at home. For long journeys it can uses both the compressed air in the tank and an IC engine.

The engine powers an air compressor whose inlet is through a heat exchanger which is cooled from the gas from the tank (as the compressed gas expands it cools down, increasing its density). This cooler air at the compressor allows a larger mass of air to be compressed as it has a higher density. This air from the compressor along with the air from the tank is collected in the secondary air storage tank. This air is fed to the pneumatic air motor through another heat exchanger which is heated by the waste heat from the engine exhaust and engine cooling system. This heating reduces the density of the gas fed to the motor thereby reducing the mass of air consumed by the motor to do the same amount of work as compared to using unheated gas. Unlike most hybrid vehicles and systems currently used, which still do not utilise he heat wasted from the engine, this system uses the wasted heat of the engine to increase the overall efficiency of the system.