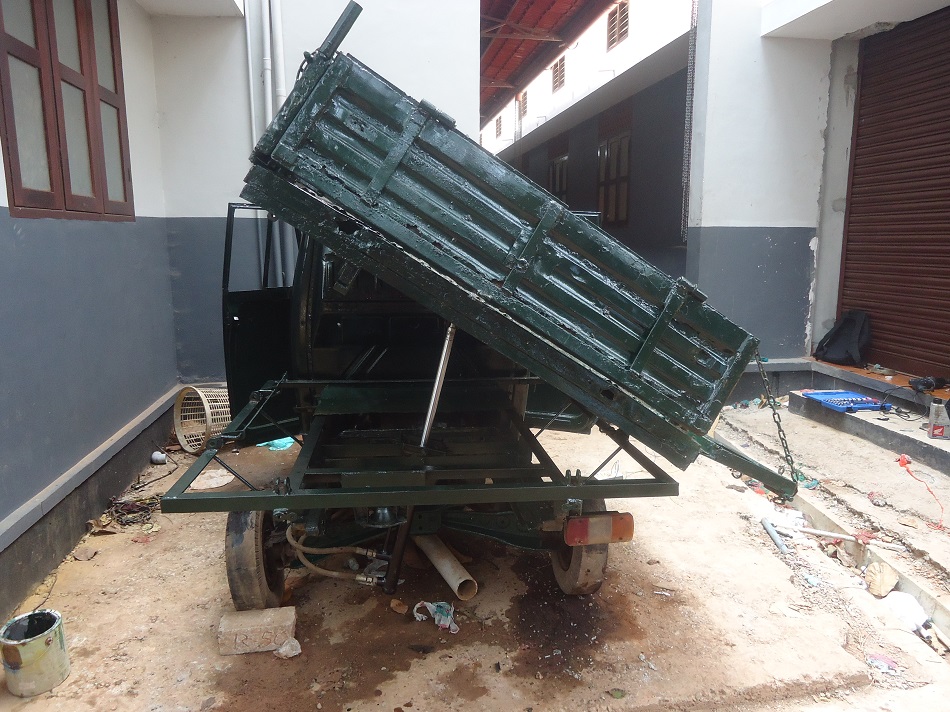 The selection of this project idea was primarily based on its dominant advantage over the existing unloading mechanism used throughout. In conventional tippers,unloading of raw materials is possible in only one direction(backward direction only). This conventional method has some practical difficulties. If the space available for unloading is less,the unloading procedure can be time consuming and might be difficult to unload unlike the way that is needed. So taking into consideration,the factors such as space ,time and difficulty level we hereby take the initiative introducing a new mechanism where unloading in multi direction(three-directions)is made possible.

The project was therefore done on a mini model of a tipper(Piaggio Ape D600). A hydraulic piston cylinder arrangement is used in this project. The hydraulic cylinder is selected as per the power requiremenets to lift a load of 1000kg excluding a dead weight of 200kg. A hydraulic pump is used for supplying oil at a high pressure into the cylinder. This hydraulic pump’s selection is primarily based on the cylinder specification. In an existing conventional tipper,the power required for the hydraulic pump is taken from the gear box,but here a AC motor is used as a substitute for the engine. To run the pump a AC motor of power 1.5 HP is used along with a distributor valve that distributes the oil from the pump to the cylinder and thereby initiating the piston to move up and down inside the cylinder. The cylinder is placed under a universal joint that is made to suit the need. This paves way for the cylinder to incline in all 4 directions. Two additional and same materials(M.S angle iron) are used here. One frame is welded on top of the chasis and the other on the base of the bucket. A special locking mechanism is implemented to lock the buckets at the time of tilt. This locking system can easily lock or unlock the frame using this system. Hence the lateral and longitudinal movement of the bucket to unload the raw materials in the three directions is made as working model through this project