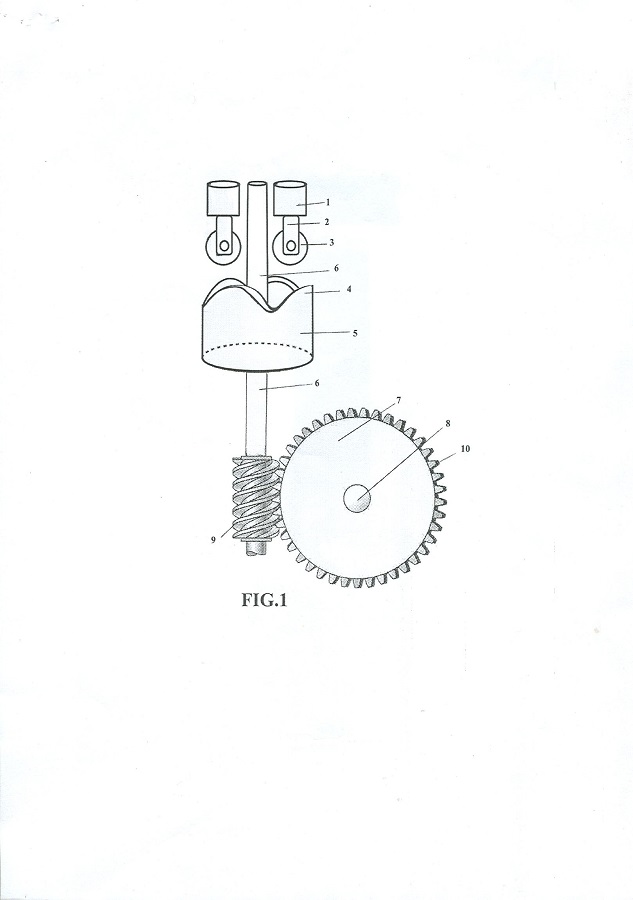 The inventor of this device, Akintunde M Lawal has been granted utility patent number GM/P/2012/0003 in this regard by the Gambia Intellectual Property Office, West Africa.

Gears are rotatable mechanical devices with cut teeth. They are usually meshed with other toothed devices to transmit and translate motion but are not inner working parts of conventional internal combustion engines that are driven by pistons and crankshaft.

Internal combustion engines are driven by crankshaft made by intricate metallurgy, the crank is connected to series of pistons that are linearly arranged. This design creates heavy machines that occupy much space.

As shown in Figure 1, piston (1) is attached to a roller assembly (2,3) which ride the sinuous wavy edges or alternating crests and troughs (4) of a sinuous crown gear device comprising of a cylindrical embodiment which has a shaft(6) that is linked to a worm gear (9). Reciprocal motion in the piston generates rotary motion in the crown gear which has its worm gear coupled with a spur gear. Other types of sinuous gear assembly trains are also possible.

Devices developed based on the new crown shaft invention can function as a crankshaft substitute that allows pistons to have a radial arrangement within internal combustion engines rather than the linear piston design in conventional engines. Hence all conventional Internal combustion engines that use crankshaft drive-mechanisms would likely be re-invented in the nearest future.

In addition to making new types of plain crown gears, a new line of magnetic crown gears can also be manufactured.

Advantages of Sinuous Crown gears over conventional crankshaft, cams and other related substitutes are,