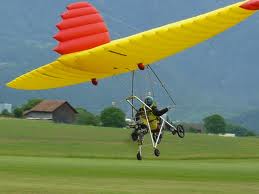 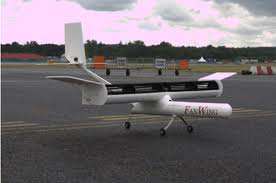 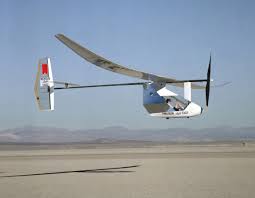 How to build a flying bicycle for everyday use. – First, base the design on proven technologies combined in an innovative manner. Second, use human power where the human engine is most efficient and electric where electric power is most efficient. Third, reduce the drag to the extremes used in human powered speed competitions.

Start with an inflatable wing for very light weight, as used by Woopy Fly (as in the first image). A properly shaped inflatable wing will have a thick aspect ratio controlled by the internal ribs with all members in tension. The thick wing will produce more Bernoulli lift than Newtonian lift and thus have lower drag. The higher the L/D ratio, the better for the lower speeds of a bicycle.

For even higher lift, incorporate the high lift generated by a full wing-span squirrel-cage fan, as used by Fan Wing (as in the second image). The squirrel-cage fan is electrically powered from Zinc-air batteries, like those found in hearing-aids. This added lift will produce a very short take-off roll of ten, or so, meters.

Thrust will be supplied by a very large diameter propeller, like those used on other human flight craft. Large, slow rotating propellors are the most energy efficient. As with a bicycle, the forward velocity will be a factor of the power output of the human rider. The handle bars of the bike are connected to the support structure of the wing to provide directional control as with any “weight-shifted” ultralight aircraft. The propeller is to the rear of the rider, and does not need a safety cage since the rotation is very slow.

Finally, wrap the human and bicycle frame in a semi-ridged, streamlined enclosure to cut the drag force by as much as 90 percent. It is illustrative to examine bicycle speeds – the fastest open frame bicycles, with world-class riders, achieve about 19 meters/second (42 mph), while fully enclosed bicycles exceed 37 meters/second (82 mph). Aerodynamic drag increases with the square of the velocity, and the power required goes up with the cube of the velocity. Drag is key, and lift over drag (L/D) is critical.

Only through the use of modern materials, electronics and energy storage can this dream of a flying bicycle be realized. Although the solar energy collection materials to cover the wing are not commercially available today, around-the-world solar powered flight will soon be achieved, and those materials will be marketed in the near future. Having led the engineering of the world's first electrically powered Cessna Skyhawk, and being a pilot myself with a degree in physics, I have the experience and knowledge to take this conceptual design to reality. Light-weight and benign community-wide transportation is my goal. Imagine fewer roads, more people space, and a new (old) pace. Quality of life can be everyone's goal.