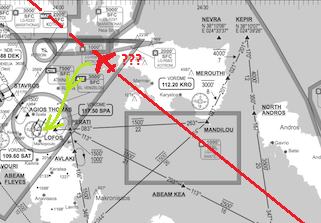 Helios Airways Flight 522 was a scheduled Helios Airways passenger flight that crashed into a mountain on 14 August 2005 at 12:04 pm EEST, north of Marathon and Varnavas, Greece, whilst flying from Larnaca, Cyprus to Athens, Greece. A lack of oxygen incapacitated the crew, leading to the aircraft's eventual crash after running out of fuel. Rescue teams located the wreckage near the community of Grammatiko, 40 km (25 mi) from Athens. All 115 passengers and 6 crew on board the aircraft were killed..

The EALC-CA will be an international safety procedure, which will allow the transmitting of a heavily encrypted signal to a very large civil aviation aircraft with auto-land capability.

In case of a major emergency (technical or security) or an exceptionally dangerous situation (see the above mentioned example), the State in which the endangered aircraft flies in its airspace, will contact the competent authority, acquire the auto-land signal for the specific aircraft, transmit the auto-land signal to the aircraft and trigger the auto-pilot of the aircraft to make the emergency landing automatically, to a preselected aerodrome.

The competent authority could be the aircraft’s registration NAA and State of registration Air Force or an international official organization (e.g. EUROCONTOL).

The signal will be considered a top secret information and will be unique for each aircraft.

One or more preselected by each State, specified and capable, aerodrome(s) will be available at all times.

The States will adapt their state safety plan for this type of incidents.

A matter of debate is the possible capability of the pilots to override the signal’s input to auto pilot.