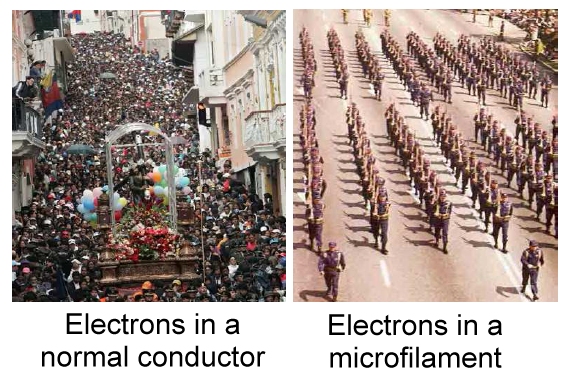 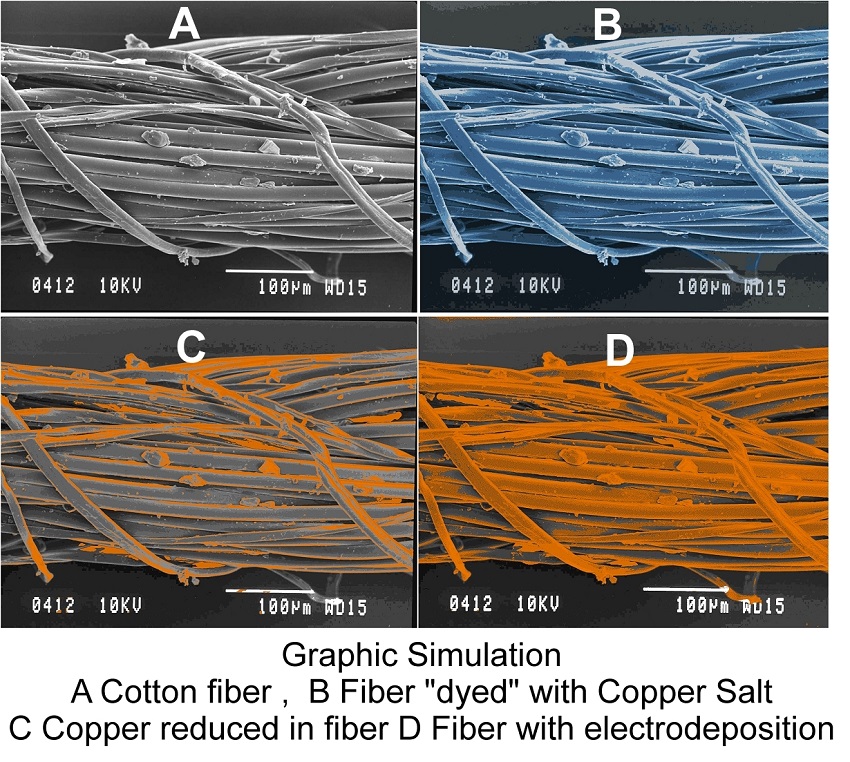 Nano/ microfilaments of Copper can conduct electricity 9 to 30% more efficiently. This is my Open Source Science contribution.

Electricity conductors, nowadays, are still constrained to physical approaches. Chemistry has been for decades put apart.In some free lance research for the last 20 years, we got across very interesting effects. Effects that were used by the Milenary Andean Civilization.

Microfilaments (Nano/Micro) depend today on theoretical/academic approaches. Science research fields do not speak with each other, nor they want to look back into the past 10,000 years of Civilization...

As my first picture shows, electricity behavior in a conductor is inneficient. Efficiency comes from a) reducing the conductivity roads to the minimum b) make it th readable i.e. Handy.

Lets take the fiber I had used more...Cotton. If I dye the fiber with a Copper Salt (any of them) I will obtain a blue colored fiber. What it means? That Copper was "reduced" by the cellulose in fiber to an hydroxide/oxide Copper compound...but not a "metal" still.

If I drain the dyed fabric (textile, thread, fiber) and then I cook it with a "Reducing Sugar" (Can be sugar, or other more complex reducers) the Copper compound will be reduced to metal. I can do the same thing with a sort of metals as Co,Fe,Ni etc.

I will have a fiber or cloth, metalized and somewhat conductive.

If I dry the reduced fiber/textile and put it in an electrolysis bath, where my cathode is the pregnant textile/fiber I will be able to "fatten" the nano/micro metals attached to the fiber ( Because they will "bridge" among themselves) At the end one will have a conductive fabric/fiber, which can be treated as a textile or , if some further treatment is done (Chemical dilution of Cellulose suport, Reductive pyrolisis etc,) could be a micro filament conductor.

The second graphic shows a "Photoshop" image of what it happens.

Projections: it will be possible with this system to make a fiber nano battery by metallizing i.e Cu first and then Ni, Co or Zn ; that will i.e. Make a "battery cage" The "current" formed just by the Pauling concept will have, in a quiet stratification environment a greater affinity for NaCl Hydrates and will separate separate H2O molecules.

If one wants to desalinize seawater, this "battery cage" will make evaporation much more easy. Why? Sea water is in an equilibrium state, a current changes that equilibrium. One basic concept: "Seawater" is not a "Solution" but is a mix of Hydrated Sodium Chloride molecules with H2O molecules and they have in their interaction "swapped margins" A current may allow, up to an still unknown extent, make those swapped margins more definite in such a way that H2O would be easier to separate from salt.
After all Nature is more perfect than Science, but there shortcuts!