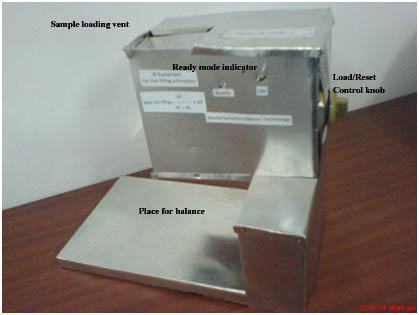 Iron filing determination in tea is a need of the hour as FSSAI has introduced the limit at 150 ppm. To date there is no such equipment to measure iron filing in tea. This instrument gives a hassle-free and nondestructive technique to measure the same. The principle and technology:

Neodymium magnetic quadrupole is applied surrounding a tunnel made of non-magnetic material in such a way that the field force becomes maximum in the center of the tunnel. The tunnel is placed vertically so that on loading a sample, the paramagnetic materials present will be retaining in the field where as the rest of the sample will be delivered through the lower end of the tunnel by gravity. On removing the poles, the paramagnetic substances, major part of which is the iron filing will be released subsequently. A continuous measure of the loaded sample mass and iron filing becomes possible with either a built in digital balance or a separate balance (minimum 0.001g readability) used for other laboratory weighing.

An electronic balance is kept on the place shown in the diagram (or a built in balance can be provided). Thus it is not necessary to take accurate weight of the sample to be analysed. Any amount, preferably more than 100g of tea sample can be directly loaded in the equipment and it will automatically measure the quantity of the sample (W1). After removing the sample from the balance top, the field is detached with the help of a control knob and the filings arrested inside the tunnel will be collected on another tared plate placed on the balance top which will give the mass (W2). Then the amount of iron filing in the tea sample can be found out as below:

Note: This basic model is designed to be used in a laboratory for determination of iron filing in tea. But the same model in an expanded version could possibly be used as an online iron filing removal accessory in a tea manufacturing factory at the dryer mouth.