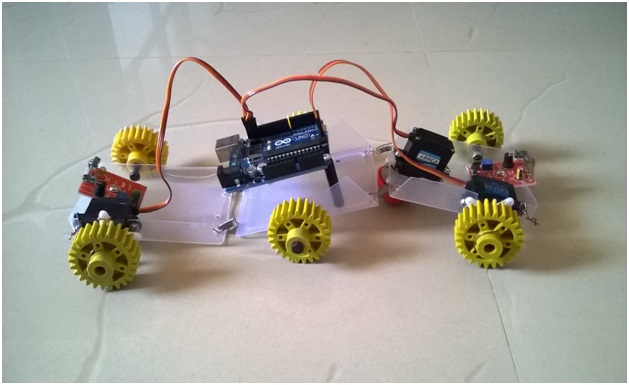 In the recent years, there have been considerable research achievements worldwide by exploring potential applications in hazardous and unmanned environments. The typical applications of climbing robots includes urban search and rescue in civil and military applications, reliable non-destructive evaluation and diagnosis in the nuclear industry, the chemical industry and the power generation industry, welding and manipulation in the construction industry, and cleaning and maintenance for high-rise buildings.

The field of robotics has long looked to nature for inspiration, especially when it comes to figuring out locomotion oven uneven surfaces. The most difficult part to design the robot is do a roll. It turns out that several kinds of critters including a nocturnal Saharan spider, a shrimp-like stomatapod that lives in Panama, and a few kinds of caterpillars use rolling as a way of escaping trouble. These movements take a lot of energy, but generate incredible speeds. Using a rolling motion would allow the robot to cover greater terrain. The robot would also be able to explore tight spaces in a crawling mode.

Inspired by the reactions of a caterpillar under attack, the Bio Inspired Smart Search_and_Rescue Robot has been proposed for Search and Rescue operation during disaster situations.

The “Caterpillar Robot” having the locomotive motion almost similar to caterpillar. The robot having servos for its movements with the help of DC power supply as a source interfacing with Arduino Atmel microcontroller.

The two IR based obstacle sensors are mounted on the front and rear position of the robot. Front sensor senses the obstacle in its path, if there is any obstacle in its path it stops and then the center servo at the joint changes its path with the defined angle, and again the other two rotate in the forward direction.

This new form of locomotion will allow crawling bots to explore tricky danger zones, aid in search-and-rescue operations or even explore for hidden treasure.