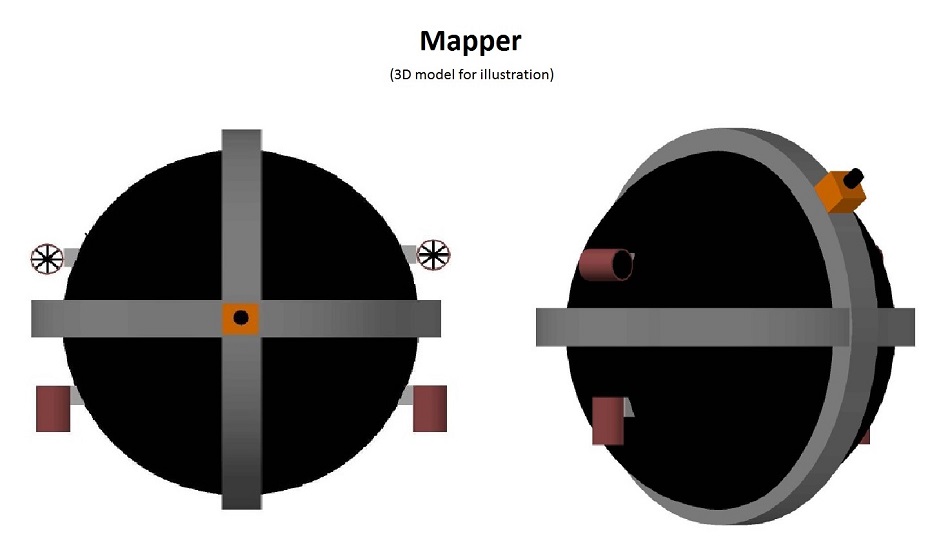 Imagine you are an explorer and you are exploring in a deeper forest or a cave. Isn’t it helpful if you have a map of that area? Well, our mapper provides you with a 3D map of the area. The idea of Mapper is to provide an automatic map/route developer robot based on laser scanning of the area. The main principle behind this technique is an obstacle avoiding aerial robot with laser scanning ability.

The aerial robot flies, scans the area and sends the data wirelessly to the user. A separate software platform is used to generate the 3D holograms of the scanned area from the data received. Once the map is generated, you can pan/zoom the 3D map to our needs [just like you pan/zoom a design in AUTOCAD software].

The mapping performance of the Mapper is based on the scanning ability and techniques. The mapper is designed in a circular form (like a circular ball) with the ability to fly. The laser scanner is placed at the inner center of the circular bot and setup is done to make the scanner slide in both horizontal and vertical ways to scan the entire area. Thus better scanning performance is achieved to scan the entire area.

The aerial robot is an obstacle avoiding robot with GPS installed in it i.e., it takes a turn/new path whenever it detects an obstacle. Once the robot is turned ON, it flies at a constant altitude based on the terrain and obstacles at that instant. It can change its altitude based on the constraints e.g., change in diameter of a cave. There are four thrusters – two for altitude and two for path/ direction changing. Whenever the robot detects an obstacle it just changes its direction using these thrusters and takes a new path. The Laser scanning setup is mounted on the robot and the setup is allowed to rotate both horizontally and vertically for better scanning.

The user has a PC with GPS connectivity. A wireless communication is established between the aerial robot and the PC. In case of scanning an open area (like a forest), the user can set the coverage area for scanning through the GPS. This information is transferred to the aerial robot and scanning is initialized. PC receives the scanned data and separate software regenerates the 3D holograms of the scanned objects.

The robot keeps track of the scanning regions by an installed GPS in its core. Hence, repeated scanning of a same area is not done and care is taken to scan the entire specified coverage area.

The mapper maps whatever it detects i.e., if a building is scanned and there are humans in that building, then it also maps the humans at that instant of time. Hence, this can be used in human search and rescue operations. It can also be used in military as a mapper and as well as to detect the enemies.